Moody pirate shenanigans from Relax Gaming in this super-dark 5 reel slot with 40 paylines, a typically high volatility, multiplier coin bonuses and a feature-packed Trail round where players move around a map to earn prizes. There are 4 shady buccaneers to accompany you in this very creative, tough and beautifully rendered slot - this is Relax at their best. Win up to 50,000x!

Features:  Multipliers, Bonus Board with 12 Modifiers

Slot lovers who have experienced the highs of Relax Gaming’s unforgettable Money Train 2 adventure will know that this is a game studio that is not scared to get creative and push the boundaries when it comes to narrative, gameplay and maths models. Super high variance slots are their bag, and you better believe it this time as Dead Man’s Trail is as dark and deadly as it sounds.

Whilst many pirate games offer a sea-shanty backdrop and Captain pugwash style graphics, Relax have identified the murkier parts of pirate mythology and their game is an eerie reflection of those tales of sea-faring crims. The setting here is a Caribbean port with huge, towering cliffs, a dark and brooding sky, and wooden ships and buildings lit only by the feint orange glow of lanterns.  Center stage are 4 suspicous-looking characters, ready to slice you with a cutlass, and a dark mist is rolling in to cover them all.

So you get the picture – if you like your slots with a heft slice of theatrics then this is one for you – Relax have nailed the intro, and as you are about to find out, they don’t disappoint with the gameplay either, in particular in the Trail bonus round. Now let’s unpack this dark little game and find out what’s making it tick. 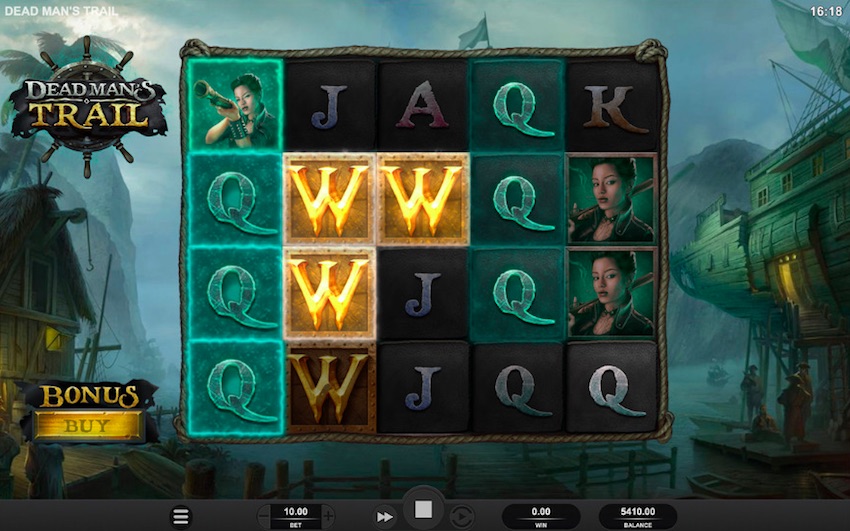 There are no big surprises in the format here – there are no expanding reels to deal with, just a simple 5 reel and 4 row set up with 40 active paylines in play at all times. The RTP is standard for Relax Gaming slots and a comfortable 96.29%, well in range of most games these days. Meanwhile, you’ll know already that the variance has a very high setting so this game is likely to frustrate and won’t suit those looking for a regular win distribution. We expect lots of potential in that tough-to-crack bonus round instead. With that in mind, the relatively low 10p min stake is a good call as it will be easy to burn though cash in no time on a game like this.

On the other hand, like many high-risk slots, Dead Man’s Trail does offer a super high top payout of 50,000x. Just remember that the odds are firmly stacked against you for reaching that win, so be realistic in your expectations.

The artwork here is fabulous. Relax are in the same pool of game developers as names like No Limit City – showcasing really top quality illustrations and animations in all their games. Under the shadow of the ominous mountain backdrop, the reels themselves are host to some nicely-rendered pirates. The 4 main characters are One-Eye with his eye-patch, Scout the cigarette-smoking female pirate, the sneering Collector rubbing his gold coin and the bald-headed cutlass-wielding Commander. These character symbols pay from 5x to 30x your bet for 5 of a kind.

There are also high cards to award the lower payouts, while a golden W is the Wild symbol, which can substitute for all the other symbols in the game. The Wild can also award a payout of its own up to 60x your bet for 5 matches, which is double the best-paying character symbol.

The pirate ship is the Bonus symbol or the game, which can launch the Dead Man’s Trail Bonus, while gold coins can also appear on all the reels to award random Multipliers during the base game. This helps to keep gameplay exciting while you’re waiting for the pirate ships to land. 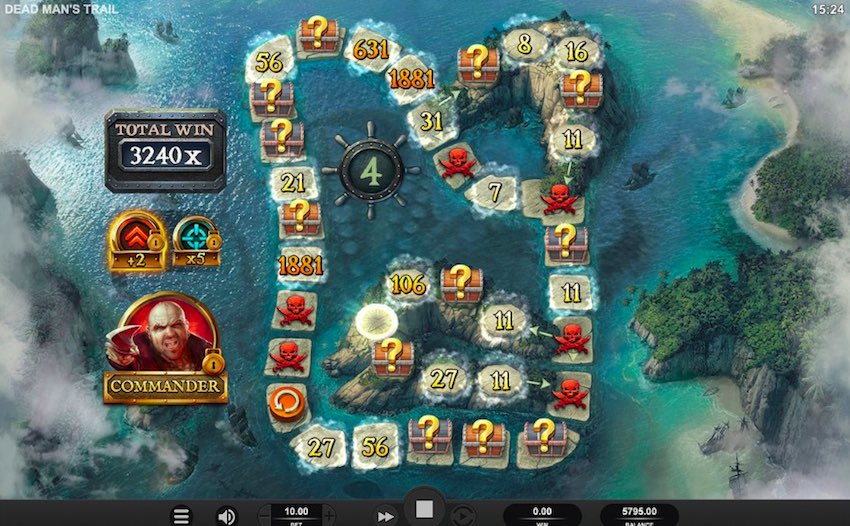 Base game is short of features
Variance too high for some

Limited to just one feature in the base game, Dead Man’s Tail delivers some powerful action in the bonus round, so keep this in mind if you’re feeling a bit short-changed at first. There is plenty to get stuck into on the Trail.

In the base game landing 3 gold coins on the reels on the same spin will get you a multiplier prize. The 3 multipliers on the visible coins are added together. This basic event livens up the base game while you’re waiting for the Dead Man’s Trail Bonus feature to trigger.

So, onto the main event, and when 3 of more Bonus symbols land on the reels together so this will activate the Dead Man’s Trail Bonus. A new screen is revealed featuring a map with a trail. Your piece will move around the board by the number of places revealed each turn, from 1 to 9. Each time you land, a new action is triggered depending on the type of tile landed on.

There are standard tiles that reveal prize values, added together and paid out at the end of the round. Skull and Crossbones signal the game is over, a Start Tile re-sets the board, whilst a Chest tile delivers one of the following:

What a game! Dead Man’s Trail is a gritty pirate adventure that touches on the darker side of fictional pirating! This slot is ideal for players looking for one with an edgy vibe and a super volatility. The drawback here is that things can get a bit boring if you don’t hit the Bonus Game for a long time. The gold coins do offer the chance to boost your rewards with random Multipliers but that is all you have to keep you happy in the slim pickings of the base game.

But let’s not judge on that front because when you load up a high variance slot, you know what you are getting into, and it’s going to be tough at times. They key is what follows, if you get that far, and that is a Trail Bonus that is both innovative and potentially hugely rewarding. It’s not often high variance games go down this route, so credit to Relax for tearing up the rule book. And just look at some of those Chest features – in particular the Collect and Command can add huge value to your overall win total, and the Super Reset is like a re-spin re-trigger giving you much more game time. And of course, those Persistent Scout, One Eyes and Commanders have potential to trigger big cumulative wins as they trigger on every turn. With a bit of luck, if you trigger these there is a real chance of getting wins in the 10,000s x.

So, in summary, what you have is some of the best aspects of high variance slots play transferred from free spins into a Trailblazing Trail round! It’s a superb idea and great execution – and we highly recommend having a crack at Dead Man’s Trail to find out for yourself. This one is live at new slot sites in the UK from September 2021.

Our Own Slots Play Guide