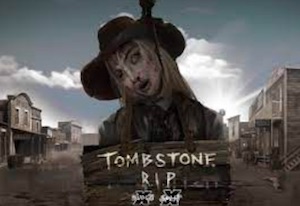 Tombstone RIP by No Limit City is a maximum volatility slot set in the Wild West, undoubtedly the developer’s toughest release to date, a no holds barred slug-fest which offers a staggering 300,000x top bounty for the best shooters but will most likely knock the hell out of you and leave you for dead. This slot revels in brutality with outlaws and hangings, grim saloons and gunfights. The special features include 108 paylines, Hang ‘Em High and Boothill Free Spins rounds, xNudge Wilds and xRIP.

Where next for No Limit City? We keep asking that question and they keep delivering a next-level of sick and twisted entertainment for us. We’ve journeyed through prisons, mental asylums, ancient Roman history, sub-Atlantic military history, and word is it’s all about to get weirder still. In 2022. But before the Punk Toilet P!$$ and $h!t fest arrives, or Ken and Barbie like you’ve never seen them before for that matter, we take another trip to Tombstone, scene of one of NLC’s first Wild West stories. It’s a sequel. But darker. Much darker. And a maths model to make even the most hardened high variance fan think twice.

Tombstone RIP is No Limit City’s first outing of 2022 and it is in keeping with the developer’s usual aggressive style. Load up the reels and you are immediately thrust into a monochrome world where images of the Wild West focus on the most brutal moments. This is no Sticky Bandits, or even Dead or Alive. There are no fun cartoons of tumbleweed and cheeky cowboys, instead we get seriously grim scenes, including hangings, amputations, arson and murder interweaved with the usual array of complex and high impact features.

But before we get to that, the basics are simple: Tombstone RIP is a 5-reel slot with rows of symbols laid out in a 2,3,3,3,1 formation. This gives 108 paylines and interesting gameplay which includes one massive premium symbol on the fifth reel, counting as 2 symbols.

Ready to step foot inside the Tombstone RIP? Before you do NLC will have you answer a disturbing question, which might be about the calibre of your favourite gun or whether you want to die with your boots on or off … 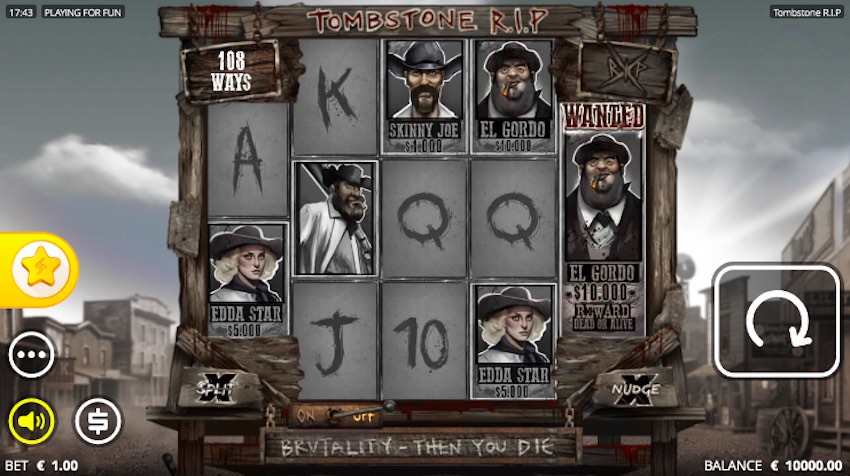 You can’t get involved with Tombstone RIP without first taking in the intimidating maths model behind the gameplay. The RTP is a fairly standard 96.08%, rising to 96.28% for those buying into the bonus features (outside the UK only). But we leave ‘fairly standard’ behind after that …

Volatility is, of course, off the scale high – 10/10 according to the profile page but just like Spinal Tap’s amp, it would be at 11 if it could. 40.08% of the RTP of the game is saved back for the free spins round which itself will only trigger once in 194 spins. Overall the games hit rate – how often a winning spin occurs – is 9.08% which is extremely low.

So, where does all your money go? Well, its saved back for that unbelievable 300,000x top payout – a staggering number that dwarves the previous NLC record of 150,000x set by San Quentin xWays. In their own words the variance here is ‘insane’. The good news is you can get involved from just 10p per spin but most likely you’ll still get rinsed in super quick time!

Make no mistake, this game has been built for those who like the action to be mean and nasty, a slog fest with a 1 in 130,000,000 chance of scoring the biggest non-progressive jackpot on the market! Beware!

We thought we should tell it like it is! Now, onto the paytable and features.

Against the dark and moody backdrop of Tombstone town’s main street the reel set here is represented by gallows (what else). On the reels you’ll find 10 regular symbols consisting of 5 high cards and 5 characters.

Other symbols here include the Tombstone Wild, which can substitute for other symbols to award more potential wins. There is also a Hang ‘Em High Scatter and Boothill Scatter, which are required to trigger each of the Free Spins rounds. 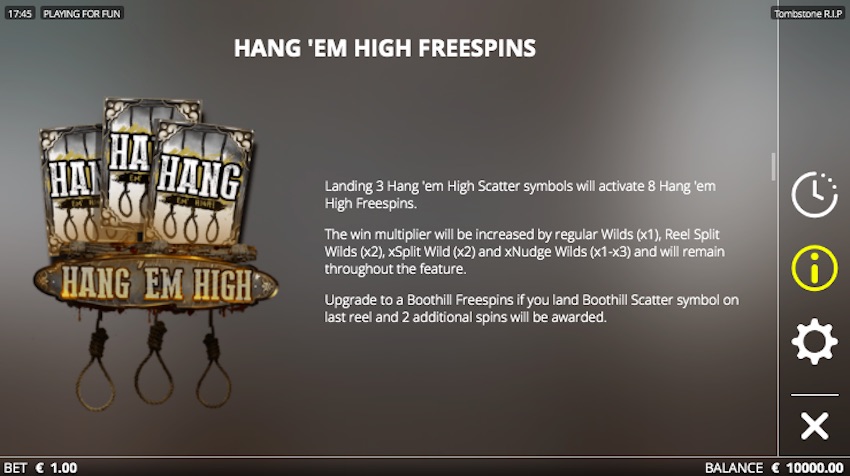 Too volatile for most players
Adult, horror-based theme

There is no let-up in the features in Tombstone RIP. Most of these you will have seen in one form or another on other NLC slots if you’ve played them in which case you’ll get used to the flow pretty quickly. If not, you should load up in demo mode first for some free play before taking the brave step of showing your money.

These Wilds appear stacked on the reels and nudge to move fully in view. They attract an increased Multiplier for each new nudge. xNudge Wilds only appear on reels 2,3 and 4 and Multipliers are added together if more than one appears at the same time.

There are regular Wilds and Splitting Wilds.

When the latter land, they split into 2 along with all other symbols on their reel, doubling the potential rewards. If a Splitting Wild affects an xNudge Wild, the Multiplier will also double.

There are also xSplit Wilds which land only on reel 5. Symbols in rows to the left will be split in four.

This feature is one you don’t want to trigger. If a winning combination lands that is worth less than your base bet, and the xRIP feature is triggered, you won’t win anything that spin. Harsh.

Landing 3 Hang ‘Em High Scatters triggers 8 Free Spins, while landing 2 will transform them to Split Wilds. Landing 3 of these Scatters at the same time as 1 Boothill Scatter will trigger 10 Free Spins. If the Boothill Scatter lands on its own, it transforms into a cowboy symbol, which becomes Wild and awards a Multiplier from 5x up 999x.

Hang ‘Em High Free Spins awards a Multiplier, which can increase each time any type of Wild symbol lands. The multipliers DO NOT re-set and remain throughout.  You get 2 more Free Spins if a Boothill Scatter lands on the reels during the Hang Em High round. Plus you get an upgrade to the Boothill Free Spins round.

During the Boothill Free Spins you also get a Multiplier, along with extra wilds from the cowboy symbol on the 5th reel. At the start of the round it turns all other instance of the same icon Wild, increasing your chances of hitting a win.

The cowboy symbol also has a random Multiplier attached, which is anywhere from 5x up to a max of 999x. It impacts the chosen cowboy symbol as well as the global multiplier and the two are added together before the win calculation is made.

Putting aside the maths of this game for just one moment Tombstone RIP is still a breathtaking game whose production style mirrors the no-prisoners gameplay. If you get that far, and let’s be honest, most of us won’t, when you trigger the final free spins round – Boothill Spins – you will see the town engulfed in blood-red flames and bodies swinging from the gallows with every win. These shocking scenes blow the cobwebs away and make you feel like any other slot is just going to feel lame in comparison.

That’s all well and good. But what about those stats? How long will you want to be involved in a game that offers such little in the base game and makes it so tough to reach the free spins rounds?

Well, NLC have made no apologies, it is what it is – unplayable in many respects. But for the love of high-risk slots action we will continue to bang at the door and see if we can hit the big numbers. And we’re sure many others will too. The interesting part is that the visuals are so compelling and unlike anything you’ve seen in a slot before that despite the frustration you’ll keep going as those dark clouds reflect your mood. And of course, those numbers present something of a challenge to overcome, right?! And can you really hit a 999x multiplier in Boothill spins?!

You see, it seems that in this instance No Limit City just doesn’t care about ridiculous things like winning, enjoyment or fun in the usual sense. The theme is bleak, the gameplay insanely volatile and the violence extreme. This is another out-there option in this contrary developer’s catalogue that will delight fans, while perplexing all others. But that’s what they are all about. How else do you shake things up?

Indeed, we weren’t sure if NLC could ever top the madness of Mental, but if you want more insanity, come to Tombstone once again!