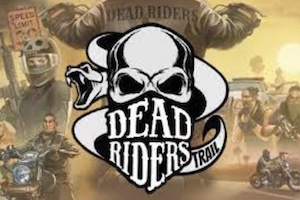 Relax Gaming bring the outlaw gangs of the Western US to their ‘Trail’ slot format with a 6x6 grid and 46,656 paylines. This is high variance action at its best with Win Cascades, Free Spins and the Bonus Trail defining your experience. 11 modifiers on the Trail include Mutipliers, Persistent Payers and Persistent Collectors. Win up to 50,000x at 96.2% RTP.

Continuing their high variance purple patch this August, literal trail blazers, Relax Gaming, are releasing this sequel to their excellently dark and moody pirate game, Dead Man’s Trail. Shifting the action from a foggy sea-town to desert wastelands and introducing a new cast of nefarious characters, Relax invoke the spirt of the hit TV series, Sons of Anarchy.

Outlaw bikers have inspired generations of writers, artists and movie makers for close to a century. Now it’s the turn of the slots developer, and as you would expect, Relax have done it with style, taking the basic structure of the original ‘Trail’ game and injecting it with an anarchic and lawless quality, and an enhanced set of features that tease with huge potential and make this a classic in the making.

Strap in for some serious slots action the way it’s meant to be as we roll out our review of Dead Rider’s Trail.

Coming from the studio who brought us the Money Train series it is no surprise that this slot will take no prisoners. It is a death or glory game that will be a thrill ride or leave you rolling in the dirt, eating dust and cursing your bad luck. Now take in these numbers ….

The paytable in Dead Rider’s Trail does not offer particularly high values even for the premium symbols. This is because the high wins are saved for the trail. Let’s take a look anyway and uncover what’s on offer.

Dead Rider’s Trail is all about hitting the Trail where there are numerous ways to add cash to your growing payout. But even before then in the base game there are some interesting mini-features to look out for. The following is an explanation of the gameplay:

This is a super-charged Cascading Wins feature.

We all know the drill – winning symbols drop off the grid after a winning spin to be replaced by new ones. But that’s not all …

In Dead Rider’s Trail any stone block ADJACENT to a winning symbol – above, below, left, right- is also removed. This creates a lot more movement than in a standard Cascade and more new symbols on the grid and a greater potential for another payout.

The process repeats until no more wins are formed.

Removing ALL stone blocks from the grid automatically triggers the bonus wheel, a giant outlaw Wheel of Fortune if you like, with segments in black, gun metal grey and faded yellow. Note the gun that acts as the pointer which will decide which segment you land on!

Should you gamble on free spins? The odds of landing the bonus trail are 33% at 4 spins and 52% at 7 spins. I would bank your spins and hope to unleash the wheel again for another chance at landing on the Bonus Trail or Super Bonus trail segment.

For once, free spins are not the main event. But they are still an interesting feature with the potential to cause dramatic changes on the grid.

During free spins, bombs are placed on some of the stone blocks. If a symbol in a winning line appears adjacent to a bomb, then the bomb explodes. ALL symbols on the bombs reel now transform to identical ones chosen as the highest payer on the reel before the bomb was detonated.

And … if you can clear ALL stone blocks during the free spins round, 3 more are added. There are no limits to how many times this can happen.

No question where we all want to get with this game though … the Bonus Trail and enhanced Super Bonus Trail are the headline acts. And far from being a complimentary game to the original Dead Man’s Trail, Relax Gaming have given the Trail feature some worthwhile enhancements this time around.

The trail itself is a winding path made up of positions with multipliers and special modifiers that can be collected along the way. The view is birds-eye, looking down over a dusty landscape as the path winds between the Rider encampment, crashed planes, trucks and cases of money.

The basics are as follows:

Bonus Trail Features are as follows:

SHOOT BACK – Total current win value is added to 1, 2 or 3 standard positions on the trail

PERSISTENT SNIPER – Same as the Sniper, but triggered on EVERY turn

PERSISTENT PAYER – Same as Payer, but triggered on EVERY turn

PERSISTENT TWO-KNIFE – Same as Two-Knife, but triggered on EVERY turn

NOTE: Silver Trucks will award ANY modifier. Gold Trucks will ONLY award Persistent modifiers or Collect All modifiers.

And … in the Super Bonus Trail feature the first truck on the trail has been changed from Silver to Gold to increase your chances of triggering the highest paying features.

Dead Rider’s Trail is another monster high risk slot from Relax Gaming that shows a game developer at creative peak, taking the very best bits of their catalogue to date – namely a mix of Money Train and Dead Man’s Trail – and enhancing them still further to produce something even better.

The theme itself lends itself perfectly to high-risk gameplay. It’s a wonder No Limit City haven’t produced a biker slot yet because this is right in their area. The lawless lifestyle and middle finger to the mainstream are what high variance slots fans love and we get it all here.

So how does Dead Rider’s compare to Dead Man’s Trail that came before it?

In terms of the key numbers, it reads the same – 50,000x top win, 96.2% RTP and 5/5 variance. But it’s in the features that Relax have done their extra work. Dead Riders has more going for it thanks to the addition of Avalanche Wins, the colossal Feature Wheel which looks so cool, and the free spins with bomb symbols.

And whilst many of the Bonus Trail Features are the same, there are some other excellent additions here too. For example, the Fuel Cans add jeopardy as you feel yourself getting low on lives, whilst the Golden Truck offers the chance of a guaranteed high paying run if you land it early on the Trail.

Comparisons aside, standing on its own Dead Riders clearly has the potential to land you some huge, huge wins based on progressive sequences where combos of Snipers and Two Knifes and any other modifiers can go stratospheric, particularly if persistent symbols are involved too.

What more can we say? It might be a brutal ride at time but surely Dead Riders is going to be in the top 10s of best slots come the end of 2022. But don’t take our word for it … go find out for yourself!