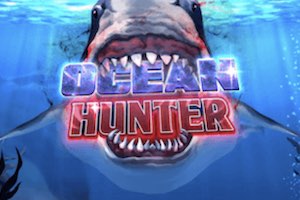 Submerge yourself in dangerous waters if you dare in this apex predator, medium variance slot from iSoftBet with 5 reels, 3 rows and 20 fixed paylines. Wild Frenzies with multipliers of up to 5x randomly drop in the base game and in the free spins round three extra reel sets appear. If you unlock them you’ll be playing with 3 wild reels on each and 80 paylines. Max win here is 1,538x.

Not to be outdone by rivals, Play n Go, whose Mega Don slot is due for release at the best slot sites in September 2022, iSoftBet are releasing their own game featuring a fearsome apex predator. Ocean Hunter turns hunter into hunted as a group of divers searching for treasures on the sea floor become the target of terrifying great whites swimming through blood red water.

Ocean Hunter is a curious mix of gore, with sharks depicted with blood stains around their mouths, and a slightly lightweight maths model. We will come onto the maths further into this review. But for now, be ready to load up this game and witness blood-red waters behind a solid blue 5×3 grid. Fish of varying sizes swim ominously behind this reel set in animations that continue throughout the game.

The soundtrack is sparse, perhaps evoking the feeling of swimming underwater with the ever-present danger of a shark attack. 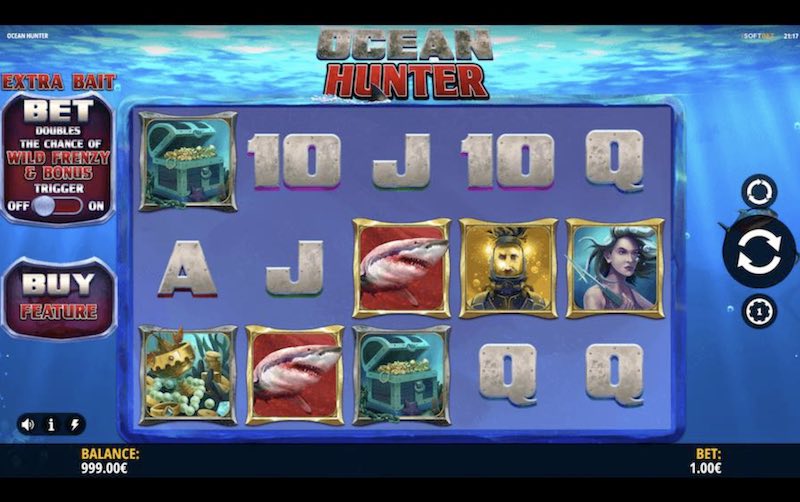 Ocean Hunter may feature the most dangerous of apex predators but the maths model is, somewhat surprisingly, far from scary. Here is how the numbers stack up:

The paytable in Ocean Hunter features some good payouts at the top level and some nicely illustrated symbols of divers and underwater treasures. Here are the main highlights:

Ocean Hunter utilises wilds, multipliers and free spins to drive up your wins. There is also an interesting extra that adds 50% to your stake which we’ve not seen before. Here is how it all fits together.

We really enjoyed the concept of Ocean Hunter when we first opened-up the game. The graphics, whilst quite basic, do well to evoke the danger of swimming amongst deadly predators and there is a Hollywood movie quality to the dark waters, sharp-toothed monsters, and eerie soundtrack. Indeed, the gameplay itself is compelling in places too, with Wild Frenzies weaving the concept of shark attacks around the gameplay nicely. And with 5x multipliers and 50x top paying symbols available, you can rack up some nice wins here. Also, the free spins round with the possibility of 80 paylines in play and three wild reels on all four sets has the potential to set off some great win sequences.

This is all great, but unfortunately, for our tastes the maths model is too tame. Those who enjoy steady gameplay and small wins will enjoy Ocean Hunter, but if you are looking for something more dangerous with higher risk levels then you’ll need to go elsewhere.

Which brings us to a couple of comparisons.

Shark action can also be found in Play n Go’s new upcoming slot, Mega Don, which, whilst lacking the atmosphere of Ocean Hunter, has far more bite in its cartoon shark. The variance there is much higher and the top payout of 10,000x far more satisfactory. Meanwhile, the symbol upgrades in the free spins round really gives you the chance of scoring some big payouts.

Another alternative is everyone’s favourite high-risk shark-themed slot, Push Gaming’s Razor Shark, from 2019. In that slot, Mystery Stacks and multipliers of up to 2,500x can drive wins of up to 50,000x. It’s a very different experience to Ocean Hunter, and built for a different audience, but it’s also one of Push Gaming’s best products.

If Ocean Hunter’s lower variance and low top payout put you off the we recommend trying one of these two instead. Happy Hunting!