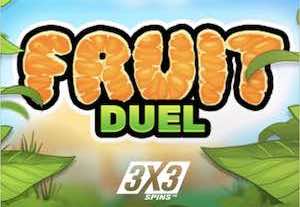 Hacksaw dial down the variance and keep things simple in this simple 3-reeler. VS symbols trigger multplier duels to decide the value of the multiplier wild reels with values of up to 100x to play for. Free spins come with enhanced odds of triggering duels and scoring high value multipliers.

NOTE: Screenshots and Videos on this page are taken whilst we played this game for real money at Casumo Casino.

When tried of chasing Zombies in Rotten or dealing with the eternal mysteries of time in Time Spinners, Hacksaw Gaming fans can turn to this beautifully simple 3 reel, 3 row fruit game, released back in August 2022. And proving that not everything they push out has to be mean as hell, Hacksaw dialled down the variance and kept things simple with Fruit Duel, with just two easy features driving the gameplay: multiplier wild reels and a free spins round.

This is the third Hacksaw game to utilise the Duel Reels feature which is also found in Warrior Ways and Gladiator Legends where two multiplier values or symbols fight it out for supremacy before wins are calculated. But unlike those other two 3-reelers, Fruit Duel is a much more light-hearted game.

Boom or Bust? What Happened When We Played Fruit Duel

Playing Fruit Duel for 30 minutes at Casumo this is what happened.

For a medium variance game, Fruit Duel dealt some surprising losing streaks – up to 15 or 16 spins with no payouts a few times – and I burned though £30 in just 30 minutes at 10p per play. VS symbols were regular enough though multipliers were never more than 5x during my play. And I never saw more than one wild reel at one time. Finally, when the free spins round did trigger – just the once in the 30 minutes – it passed without much drama and just a 13x win in total.

So not a particularly fruitful experience but a luckier session might push out some good wins where more than one multiplier wild reel is in play and overall Fruit Duel is a nice looking 3 reel slot.

Here is a highlights video from our session including free spins round.

Fruit Duel has a variable RTP. Where I played at Casumo the RTP was set to 94.48% which is about average for Hacksaw Gaming slots in the UK. It is a little under what we have come to expect from slots in general, taking around 2% off the standard Return to Player.

The variance here is medium which makes Fruit Duel something of an outlier in the Hacksaw catalogue. This is also reflected in the top payout which is a relatively small 3,333x.

Utilising a simple 3 reel and 3 row set up, Fruit Duel has 17 paylines to win across. You’ll need to land THREE identical symbols across a payline to score a win and there are NINE symbols to match on.

Their values are as follows: Blueberrys and Lemons are 0.1x; Bunch of Grapes and Oranges are both 0.2x; Apples are 1x; Bananas are 1.5x; Cherries are 2x; Strawberries are 5x; Wilds are 5x.

The Wild, as well as triggering 5x payouts for three on a line can also substitute for any other symbol to form a win. 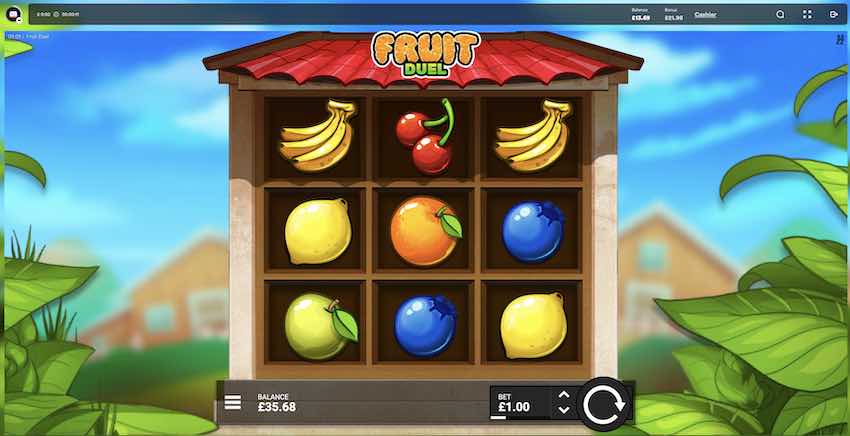 Fruit Duel is a simple game to follow with just two additional features.

DuelReels Turns One Reel Completely Wild With a Multiplier

Where winning combinations include the wild reel then the multiplier is applied to those wins. And … it’s possible to have more than one wild multiplier reel, in which case the values of those multipliers are added together before the win values are calculated.

Free Spins symbols regularly pop up on the reels. When three land at once the action moves to a night-time scene and 10 spins are credited. During this bonus round there is a higher chance of landing the VS symbol and landing the higher range of multiplier values on the expanding wild reels.

Warrior Ways by Hacksaw Gaming – Back in March 2022 Hacksaw released Warrior Ways, the first slot of theirs to feature the VS symbol. Unlike Fruit Duel it operates at a higher variance (4/5), has a 5×4 set up, and offers a much bigger top payout (10,000x). But the same dueling feature where the bigger multiplier wins the battle on an expanded wild reel, is evident. So if you like Fruit Duel but want to play on a more volatile maths model, this slot is for you.

Gladiator Legends by Hacksaw Gaming – Following Warrior Ways came Gladiator Legends, just a month later, and likewise it runs at a higher variance to Fruit Duel (5/5) with a 10,000x top win too. This is a much darker slot with bloody axes and fearsome warriors on the reels, but again it utilises the VS symbol to trigger wild multiplier reels. There is also a Champions of the Arena bonus round with multipliers of up to 1,000x!

Casumo Casino – You can play all of Hacksaw Gaming’s slots at Casumo, one of our favourite slot sites. Casumo has more than 2,500 games to spin on, housed in a slick website. This is also a great place to play if you enjoy slots tournaments. Their regular reel races take place hourly with prizes of £1,000s.

Play OJO – You could try this game at OJO too. They are famous for their no wagering-no win limit free spins offer so a great place to enjoy slots. OJO has more than 2,000 of them to try and a super-cool filter menu to search out games like your favourites. OJO is on the Skill on Net platform, also home to Bacana Play.

When loading up a game like Fruit Duel with a critical eye it’s important to keep in mind that Hacksaw’s objective here is not to create another highly volatile game like Hand of Anubis or Alpha Eagle, but rather simple, unpretentious fruit-slot fun. And in that respect, they deliver! This is not a game that will challenge your senses but rather one to switch off and escape with.  Our own testing didn’t produce any big wins but the potential is there when more than one reel turns wild and multiplier up to 100x come into play.

Hacksaw have departed from their usual path to high variance glory and successfully delivered a simple, fun, mid-range 3×3 slot.