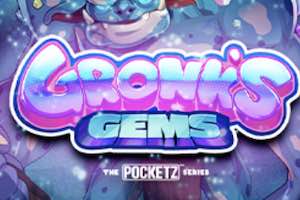 Join the lovable gem-collecting troll, Gronk, in creating clusters of symbols in this quirky grid slot with cascading wins. Charged symbols are saved and absorbed into Epic Gems to form big clusters at the end of each cascade sequence. And in the free spins round a global progressive multiplier grows with each cascade and unlocks when special X Gem symbols drop. Win up to 7,500x.

NOTE: Screenshots and Videos on this page are taken whilst we played this game for real money on Casumo Casino.

Gronk’s Gems is a quirky cluster pays grid slot from Hacksaw Gaming. It was released in December 2022. Hacksaw have a reputation for usual themes and innovative slot mechanics, often with a high variance game engine. For evidence check out their cutesy Pug Life slot or back-alley Tom and Jerry-type capers in RIP City.

In this instance, the star of the show is the beefy gem-loving troll, Gronk. The action takes place at night in front of his cave and he stands reel-side throughout the game, grunting approval when the big wins hit.

Gronks Gem’s is part of Hacksaw’s Pocketz series – built for mobile play. But it still looks great on desktop in our video and screen shots.

Boom or Bust? Here’s What Happened When I Played Gronk’s Gems Slot

Over a 30-minute session at Casumo I played Gronk’s Gems for real money at 10p a spin. It was an enjoyable slot and definitely a less volatile game than Hacksaw’s tighter ones like the recent Rotten which proved impossible to crack.

The action ticked along at a nice pace with regular small wins boosted when the Epic Gem lands during a cascade. If you charge 3 or 4 symbols during that caschade you can get some nice 50x or more wins this way. Max win outside free spins was 62x. Once I went 29 spins without a win, but that was an anomaly in the overall rhythm of the game.

But of course, nothing big happened until I unlocked the free spins and then Gronk’s Gems delivered a nice 305x win thanks to a 51x multiplier and re-booting the spins once with another 3 Gem Bag symbols.

You can see this in the video:

If you unlock the free spins round land the multiplier grows quickly as every win cascade adds more value to it. If I’d landed 3 more Gem Bags I could have been looking at wins of more than 1,000x.

A good run made this an enjoyable slot and its certainly an easier play that Hacksaw’s super volatile games. It will suit anyone who likes cluster pays games and gem-based slots with quirky characters.

The RTP of Gronk’s Gems is 96.24% which is standard for Hacksaw slots. For comparison, recent releases like Break Bones come in at 96.22% and the famous Hand of Anubis comes in at 96.24%. The variance is medium (3/5) which puts it in the same bracket as RIP City, though Hacksaw Gaming slots can sometimes feel like they are higher than advertised in my experience.

The game takes place on a 5×5 grid with wins triggered by forming clusters of five or more matching symbols that connect to each other vertically / horizontally.

This image shows the paytable screen in the game. 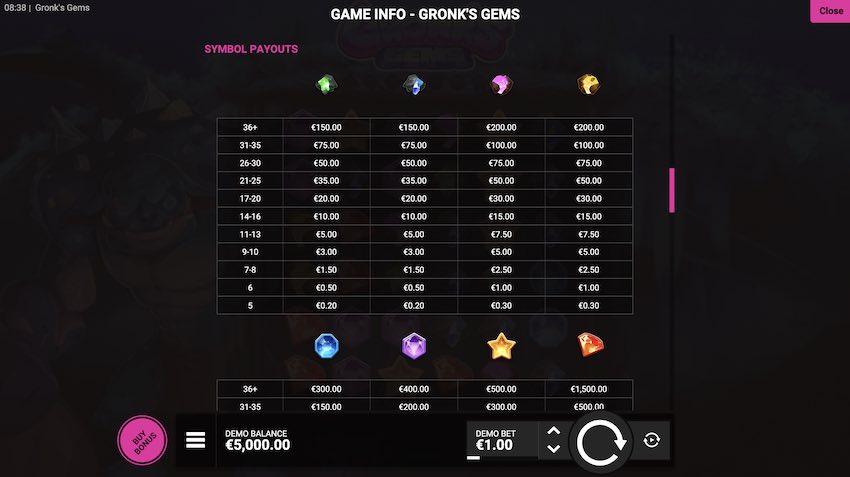 Not as hardcore as other Hacksaw Games

Every Win Triggers a Cascade

In classic cluster pays style, every win on Gronk’s Gems triggers a win cascade where all winning gems are removed and new ones drop in to replace them. This drives the progressive multiplier in the bonus round as well as giving you more win opportunities from any spin.

When a symbol forms part of a win cluster, then it causes all symbols of the same type on the grid to be charged. Symbols with a charge are displayed above the reels. They remain charged until the current spin cycle with all its cascades ends.

The objective is to charge as many symbols as possible before the cascade ends.

IF an EPIC GEM lands during the cascade sequence it stays on grid until the end. When the last cascade completes, ALL charged symbols transform into the highest value charged symbol before being sucked into the Epic Gem to form a super cluster! When this happens, the Epic Gem explodes to set off a new cascade.

In short, you want to charge up as many symbols as possible on every spin in the hope of landing an EPIC GEM that can trigger a further cluster win and cascade.

The first free spins round is Gronk’s Treasure. Here you get 10 free spins with better odds of landing the crucial Epic Gems.

You’ll need 3 Gem Bags to trigger the Gem Hoarder free spins round. During the round, landing 3 more re-sets the counter to 5. In this instance, each symbol removed in a cascade add 1 extra to the global multiplier appearing above the grid.

Special X Gem symbols appear on the grid, and if a winning cluster includes an X Gem then the current global multiplier value is applied to the win from that cluster. Where there is more than one X Gem symbol connected to the cluster, for each X Gem the multiplier is applied once.

Toshi Video Club by Hacksaw Gaming – If you enjoy Gronk’s Gems and want another Hacksaw grid slot with cascades, you could try Toshi Video club. This is a game that riffs on Japanese-culture and has a much higher variance than Gronk. However, it also comes a higher top win of 10,000x and a global multiplier triggered by landing special Daruma symbols. Spins start at 20p.

Gem Rocks by Yggdrasil – Alternatively, if you just enjoy gems in your slots play you could try this 2018 release by Yggdrasil. Gem Rocks has 4,096 paylines but no bonus round, only Mega Symbols and cascading wins to move the action along. The mega symbols grow up to 4×4 in size and the top win is 9,000x.

Play OJO – Skill on Net site, Play OJO, is one of our favourite casinos right now. It has a slot catalogue to match any of its rivals and offers 50 free spins with no wagering requirements to all players who make a first deposit of £10 or more. There are lots of level-ups, rewards and tournaments for regular players too.

Dream Vegas – This White Hat Gaming casino is currently offering a huge 100% up to £300 match bonus on your first deposit with up to 150 spins on NetEnt games. It’s a slots players paradise with over 2,000 games to try. Dream Vegas accepts deposits with Paypal but has a slightly higher than average minimum deposit of £20.

Gronk’s Gems is an enjoyable play for anyone who likes Cluster Pays games. Its medium variance gives a balanced payout model with enough small wins churned out on a regular basis to keep things interesting until the free spins round is triggered. The progressive multiplier mechanic in the bonus round means big, big wins are available too. If you are new to Hacksaw slots and looking for an easy entry point this would be a great place to start.