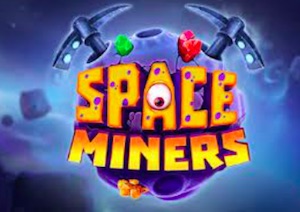 Space Miners is an intriguing and highly volatile slot from Relax Gaming with an intergalactic theme and a style reminiscent of Reactoonz. The game takes place on a 6x3 grid which expands as blockers are removed, increasing paylines from 729 up to 1,000,000. Colourful alien miners will help you open up the reel set whilst bonus features include Power-Ups that destroy blockers, Wilds and unlimited Free Spins. The best explorers in the space age could scoop a top payout of 50,000x stake.

Relax Gaming have fast become one of our favourite slot providers here at AllSlotSites.com, bringing their unique blend of high octane, high variance mayhem mixed with original themes and gameplay. Original they are for sure, but there is more than a hint of Play n Go’s Reactoonz in the artwork of Space Miners – never mind, whilst they might have taken a bit of inspiration from their Swedish rivals there but the features and maths owe more to Relax’s own grid series including Cluster Tumble and their festive effort, Santa’s Stack. So fans of those games will enjoy what’s on offer.

Space Miners takes players into a mine on what looks like an asteroid set in outer space. The illustrations are fun and cartoon-based with a dark blue backdrop with glittering stars making way for a pink bonus screen littered with carts of minerals. As well as Reactoonz the screen might also remind you of some of those old space invaders games from the 80s and 90s, albeit build with a more sophisticated graphical package of course!

As we will come to see, Space Miners manages to span both the grid slot and traditional video slot categories and it’s all about growing the grid from an initial 729 win ways to 1,000,000 win ways, done by breaking down ‘blockers’ (again reminiscent of Relax Gaming’s Cluster Tumble) that surround the active 6×3 grid that appears when you first load up. The alien miners are your friends here – they are there to destroy the blocker tiles to expand the gaming screen as far as it can go! 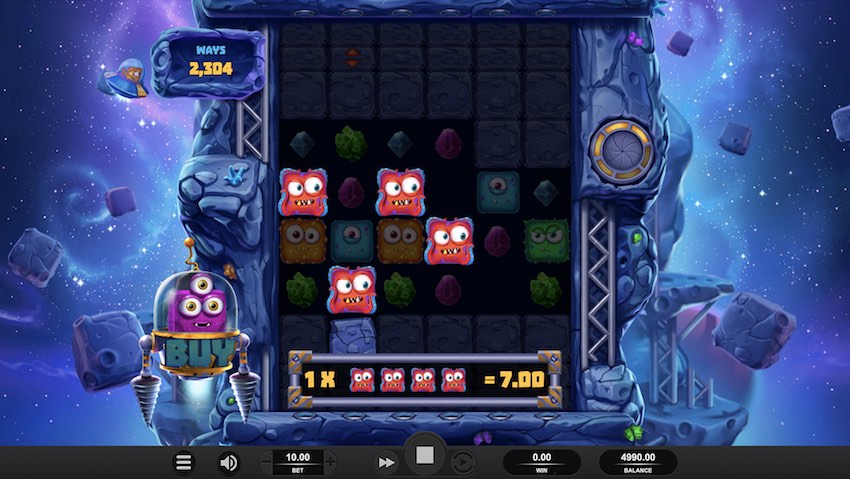 Moving on with the maths and Space Miners boasts a very agreeable 96.47% RTP, which is above average and another good reason to give this one a spin.

What is very important to understand is that this game is highly volatile, rated a 5/5 by Relax’s development team. So the win distribution is going to be very uneven and we will notice as we run through the free spins round that Space Miners is the kind of game that will build your hopes up then smash them time and again. Although of course on occasion it will deliver something epic too. Just look at that 50,000x top win for proof! A good combo of multipliers and free spins will be required to hit the big numbers.

Finally, note that the minimum bet is 10p, so whilst the high variance it will be a turn-off for risk averse gamblers, this does at least make the game more accessible for those wanting to play with a lower budget.

The symbols in Space Miners are all brightly coloured cartoon aliens in orange, blue, purple, red and green. There are also differently coloured space minerals that look like crystals, along with blank blocker tiles. The aliens can pay from 0.5x to 6x stake for 6 of a kind. The space minerals can award 0.4x stake for 6 matches.

The box of space crystals is the Wild and this can substitute for all the other symbols in the game to create more potential winning combinations. The Wild can also expand to cover the whole reel. Finally, the spaceship is the Bonus or Scatter symbol, which can be collected to trigger the special features. 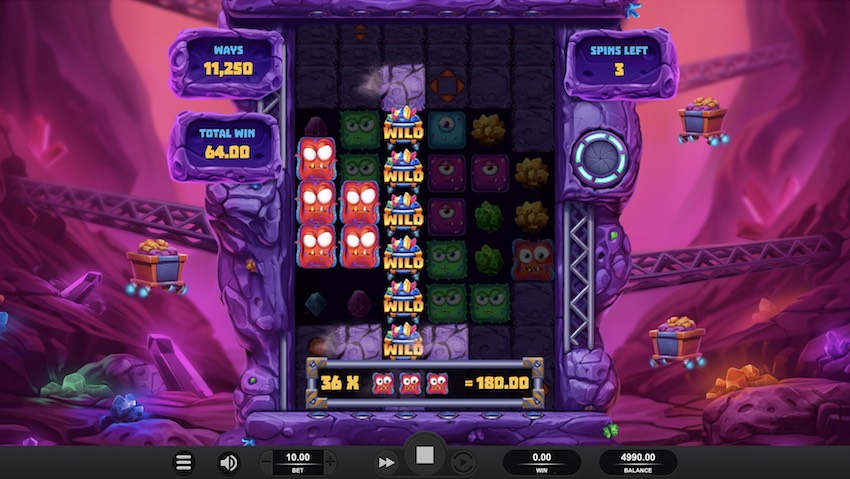 Very similar to a few other slots

Relax have opted for a relatively simple set of features here – it’s all about opening up those reels and triggering the free spins. Here is how it works.

Whenever a winning combination appears on the screen, the winning symbols disappear to be replaced with new ones. At the same time, the blocker tile next to a winning symbol is also destroyed, expanding the gaming screen for the next spin. This continues until all the tumbles have completed and no new wins appear, after which the gaming screen returns to its 6×3 initial size.

Whenever the bonus spaceship appears on the screen, it is collected. Once you have collected 3 spaceships, you will receive 6 Free Spins. This can increase further if more Scatters land. If a spaceship arrives during Free Spins, this adds another Free Spin. When blocker tiles are destroyed, they stay destroyed for the duration of the Free Spins.

Some of the blocker tiles have Power Up symbols attached to them. If these are destroyed, a Power Up feature is triggered, depending on the symbol:

Space Miners fun, cartoon-like exterior masks the heart of a truly volatile beast! The gameplay is fast, furious and highly entertaining, though more often that not being extremely frustrating too!

In the same way that popular cluster pays games with win cascades and multipliers (Bonanza for example) are all about hitting a good run of consecutive wins where the progressive multipliers can hugely increase your payout, so in this slot the Tumbling Reels mechanic is crucial to getting a good experience. A good run here can open up 100,000s more paylines whilst a good Power-Up added to the mix (preferably the Cross Power one) can speed things up dramatically too. There will be some epic win sequences from this game we predict. And some very frustrated punters too!

Overall, as we have come to expect from Relax, the game is brilliantly designed with strong visuals, fast-paced gameplay and an excellent potential return. So if you fancy taking a trip into outer space for a spot of mineral mining, the Space Miners adventure could offer you the perfect opportunity!