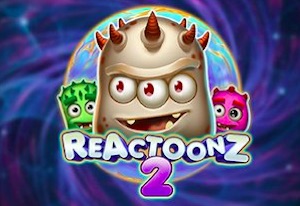 Reactoonz 2 is a colourful and energetic slot from Play n Go with a cartoon monster theme and a high volatility rating. Played on a 7x7 grid, this game has tumbling reels and a Cluster Pays mechanic, while bonus features include Electric Wilds, expanded Gargantoon symbols, Multipliers and a 5,083x stake jackpot.

Play Reactoonz 2 At These Slot Sites 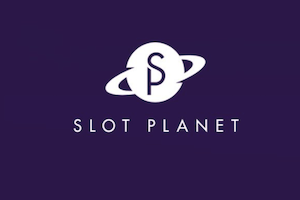 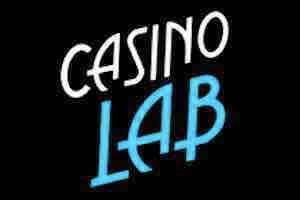 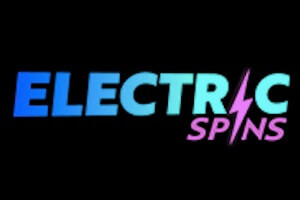 Reactoonz 2 is a manic follow-up to the classic grid slot, Reactoonz from Play n Go, featuring a cast of miniature minion-type characters and an original and innovative electricity-theme and gameplay. It uses a classic Cluster Pays model with avalanche wins at its core but has many more tricks up its sleeve to drive the gameplay forward and boost your wins.

The action takes place against a backdrop of swirling electric and the name of the game is to build your wins progressively through avalanche wins and the fluctometer to the right of the grid which triggers extra wilds when it is full. This makes for exciting slots play as the further you get with each avalanche and meter, the greater the payout potential. But there is much more to this game besides as we shall explain. 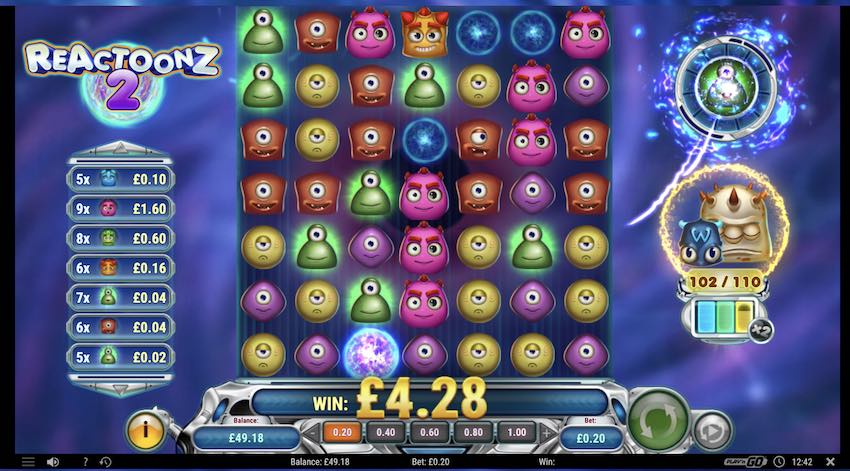 Reactoonz 2 has an RTP of 96.2%. That is exactly what we expect from Play n Go. The have a few other slots with a higher RTP but not many. For better returns you could try:

This is a high variance slot. It is in the same bracket as games like Shamrock Miner and Hooligan Hustle from the same provider. However, the high variance is not mached by huge potential. The top win is just 5,083x which is unimpressive in today’s market. You can find better top wins in games like The Green Knight (10,000x) or Charlie Chance XReelZ (20,000x).

Reactoonz 2 is as distinctive in looks as the original. The reactoonz characters are nicely drawn and full or character. Their values are good, particularly in the top range of cluster size. 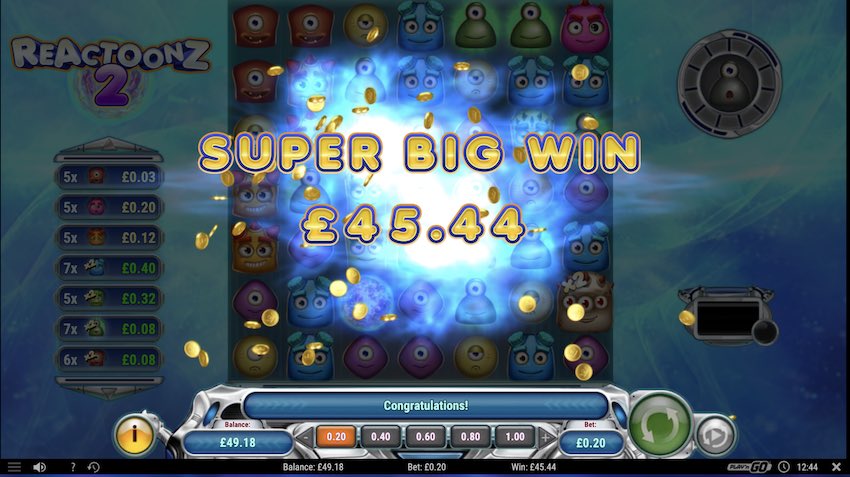 In an effort to build on the original, Play n Go have added several new features to the Reactoonz game which adds complexity and no little confusion as you get used to the game. You’ll need a few plays (maybe in demo mode) to understand how it works.

Here are those features.

Central to the gameplay is the Avalanche Wins mechanic that all Cluster Pays fans will be familiar with. After any win, winning symbols are removed from the reels and new ones drop in to replace them. If more winning clusters are formed, then the process repeats. And so on, until no more wins are formed.

The Fluctometer and Building Electric Wilds

Look for the Fluctometer to the right of the grid. This is critical in earning extra wilds.

What are Electric Wilds? These can substitute for all other symbols but they also perform magic when two appear on the grid. A charge form between them, removing symbols as we explain below.

The other meter in the game is the Quantometer. This one gets filled with one charge every time a reactoonz symbol is removed through an Avalanche. Filling the meter to the required size unlocks one of FOUR levels as follows:

Those symbols that are removed add charges to the Quantometer so this can massively boost your charge level.

Here is what we liked about this slot:

And flaws in the game?