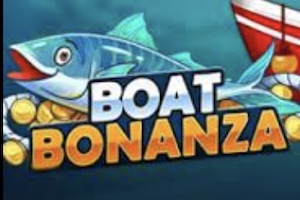 Boat Bonanza is a high variance fishing-themed slot with 5 reels, 4 rows and 12 fixed paylines. Catch Symbols collected by floating boats above the reels bring up prizes up to 1,000x. In the bonus round boats come with multipliers, and after every catch a re-spin is triggered. Mega Catches, triggered by two boats, collect ALL Catch Symbols on the reels. Play from 20p.

Boat Bonanza is another fishing-themed online slot joining the likes of Fishin’ Frenzy, Golden Catch, Lobstermania and Big Bass Bonanza in an already crowded genre. For this one, Play n Go have set the action on a 5×4 reel set that floats beneath the water. With a split-screen effect, above the surface, two boats float on the waves and become critical in unlocking bigger wins, and in the background a typical British seaside town can be seen with big wheel, pier and sandy beach. The graphics are as simple as the gameplay, but to anyone who enjoys a good fishing slot, the visuals are generally pleasing on the eye.

Boat Bonanza is due for release at slot sites on October 13th 2022. 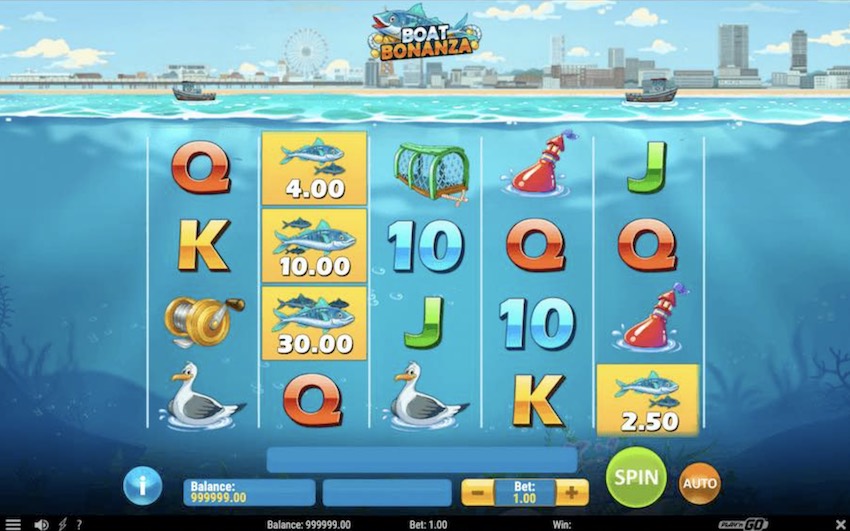 Boat Bonanza’s basic-exterior masks a quite high variance maths model. Here are the important numbers from the game info sheet:

The paytable here is made up of some basic fish-themed graphics. There are some tasty values however which can work to give you some big wins when combined with multipliers in the bonus round.

Here are the highlights of the paytable.

Re-spins with multipliers for free spins
High value Catch Symbols up to 1,000x
High value premiums up to 200x

The key to bigger wins in this slot is unlocking the free spins round. But before we get there, check out the main feature of the base game, the Catch Symbols, carrying prizes of up to 1,000x.

How does Boat Bonanza compare to other fishing slots? Here are two other recent fishing-themed releases worth checking out.

Golden Catch by Big Time Gaming – runs at a higher variance with a greater RTP (96.53%) and much higher top prize (31,430x). This is a Megaways™ slot with expanding reels that uses a symbol ‘collect’ mechanic where boats floating above the reels pick up fish symbols with instant win values. Free spins come with UNLIMITED multipliers. Golden Catch is a much more volatile beast and a game that high variance enthusiast would prefer to Boat Bonanza.

Big Bass Bonanza by Pragmatic Play – also has a higher variance at 96.71% and a greater RTP (96.71%) but a disappointing max win of just 2,100x. Like Boat Bonanza, this is a simple game, where all the action happens in the free spins round where landing fisherman and fish on the same spin collects the instant win prizes associated with the fish. If you like games with Wilds you’ll prefer Big Bass Bonanza, it has lots of them, and many multipliers too – up to 10x – that are collected when wild symbols land in the bonus round.

If you are looking for a new slot site to try Boat Bonanza at, here are two more recommendations:

Duelz Casino – this casino from SuprPlay, also home to Voodoo Dreams, currently offers a 100% match up to £100 and 100 Book of Dead spins. It also has a huge slots catalogue of more than 1000 games. They are trusted and licensed in both the UK and Malta.

Spin Rio – We also recommend Spin Rio, a samba-themed casino from Aspire Global Ltd, which only opened in 2021. You can claim 100 free spins on NetEnt slots when you join and enjoy over 700 slots. Spin Rio is also licensed by the UK Gambling Commission.

For a high variance slot, Boat Bonanza has a quite calming feel in the base game with fairly regular wins triggered along the paylines. What you are really after though is the Catch Symbols. We picked up a few during our testing, though their values were disappointingly small – never greater than 20x, though the paytable shows potential for 1,000x.

The real good stuff is saved back for the bonus round however, where a good win sequence is made possible by the re-spin feature that takes Boat Bonanza to another level. Here, if you can collect some good multipliers, and keep adding to your spins total, there is some really good potential and getting close to that 5,000x max payout may be a possibility. Keep in mind though that this will be a rare occurrence as this is a highly volatile game and in reality any win over 1,000x is going to be a tough ask.

In summary, with some interesting features and a mid-range top payout, Boat Bonanza offers enough to set it apart from other fishing-themed games to make it worth a spin this autumn.