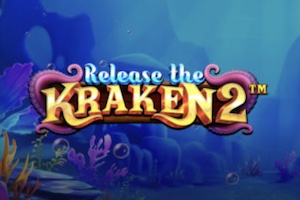 Play Release The Kraken 2 At These Slot Sites

Pragmatic Play have re-worked their deep sea high variance adventure, Release the Kraken 2 for winter 2022. The game retains its cartoon artwork and cheerful sub aqua characters – the reels are stacked with crazy looking fish and smiling serpents alongside the ominous looking Kraken Wild itself.

This is a highly volatile game so beware, it comes with many of the same features as the original, including Free Spins and plenty of wilds that are core to the gameplay. But now they’ve added in a Deal of No Deal style box-pick to decide on how many free spins and multipliers you get for extra jeopardy. Its slightly disappointing however that the top win has been dropped down to 5,000x.

Let’s head to the deep blue yonder then and see what lurks beneath the waves. In this review we’ll uncover the features, gameplay and key parts of the maths model so you know what you’re getting into before you spin those reels.

The RTP for Release the Kraken 2 is 96.03%. This puts it in line with most Pragmatic Play slots but marginally under the original game which ran at 96.5%.

This is a very volatile slot – rated as a 5/5 by Pragmatic Play themselves. So expect a rough ride, but with all those multipliers potentially in play in the bonus round, there could be some epic win sequences on the cards when the stars align.

Spins start at 20p per play.

Release the Kraken 2 is rich in graphics and modest paytable values are boosted by significant multipliers in both base game and free spins round. Here are the highlights of the paytable:

There are plenty of features to keep the gameplay interesting in the base game, but things get dialled-up in the free spins round where this high variance slot really shows us what it’s got. Here are the main features:

You’ll need to land 4+ wilds on the reels on one spin to trigger a Wild Re Spin where the Wilds in play remain on the reels, each one moving to a new position before the Re Spin takes place.

In this feature, if you land another wild in the re-spin you’ll get another one. You return to the standard gameplay only when no more wilds land on the reels.

In a feature similar to No Limit City’s xNudge Wilds, stacks of wilds appear on reels 2, 3 and 4. When they land they nudge up or down until they fill the entire reel. With each nudge a multiplier value increases by 1x.

Once the nudges have ended any wins are paid out, and where a winline passes through the wild stack, the multiplier is applied. If more than one wild is involved, then the multipliers are added together.

Look out as well for the Kraken who will appear at random times on a non-winning spin. The beast re-arranges the symbols to to create a GUARANTEED win worth from 20x to 50x.

Occasionally, you will also be gifted THREE scatters to help trigger the bonus round.

In a Deal or No Deal style twist, the number of free spins and the value or your multiplier in the free spins round are determined by a special game in which you must pick boxes and accept or reject what is offered when they are opened.

The possible contents of the boxes depends on how many scatters landed to trigger the round. Here is what you can get:

You’ll have a choice of 16 boxes each containing one configuration of free spins and multipliers. Just like the gameshow, you must pick one box and then choose to accept or reject based on its contents. If you reject, some boxes are removed and you choose again. This process repeats until you choose a box.

We enjoyed this feature and the added level of jeopardy and self-determination it adds to something that is normally at the mercy of the game engine.

During free spins you get these enhancements:

NOTE: there is no chance to re-trigger free spins in this game.

If you like this Kraken-themed slot then you should try these ones too:

Release the Kraken – The original slot from Pragmatic Play has a few things going for it over this one – a higher top win (10,000x compared to 5,000x) and a slightly higher RTP at 96.5% compared to 96.03%. The features are also different, but equally compelling. They include the Infectious Kraken Wilds which guarantee wilds on the reels on one spin, and when they land, they transform all adjacent symbols into wilds. Another great game, and equally volatile!

Beat the Beast Kraken’s Lair – This is Thunderkick’s Kraken-themed game, and part of the Beat the Beast high variance series. It has a higher top payout than Pragmatic’s game – 7,777x compared to 5,000x. It also includes Expanding Symbols, Wilds and Free Spins. In Thunderkick’s slot, the free spins can be re-triggered UNLIMITED times too! The RTP is marginally better as well at 96.12%.

Where to Play Release the Kraken 2 Slot – Further Recommendations

We recommend these 2 new slot sites to play Release the Kraken 2 on.

Casino Lab – A Genesis Global casino with a wide choice of more than 1,000 slots including the full range of Pragmatic Play games. This is a trusted and reputable slot site with UK Gambling Commission licensing. They also offer 300 Reactoonz free spins to new players making a first deposit – and that’s enough alone to make you want to join!

Spin Rio – If you like a bit of Samba with your spins then try Spin Rio, a colorful slot site from Aspire Global. You can play Pragmatic Play slots here and start with 100 free spins on NetEnt and Play n Go slots too. This casino offers a fast cashier service and accepts deposits to play slots with Paypal too.

Pragmatic Play have retained the fun, friendly stylings and artwork of the original Release the Kraken Game and upgraded the features across the board to something more sophisticated and innovative. We really love the Shifting Nudging Wilds with multipliers, although its nothing new – almost a clone of NLC’s own xNudge Wilds in fact. But the most exciting part is surely the Dead or No Deal free spins feature which makes gambling for a better free spins-multiplier combination a thrill. Our only gripe here in fact is the lower top win of 5,000x. But if you can live with that, this is a better bet than the original and well worth your time.