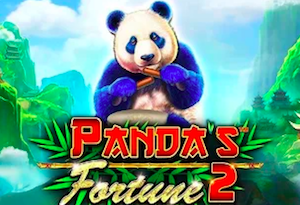 Pragmatic Play continue their run of form in the top quality high risk slots market by following on from the excellent Cash Elevator and Buffalo King Megaways™ and returning to one of their old classics – Panda’s Fortune.

This slot is inspired by one of Asian’s most emblematic animals: the giant panda. This lovable bear is joined on the reels by a range of other Asian-themed imagery, such as red lanterns, golden toads and koi fish. Traditional Chinese music plays in the background, while birds chirp and the evocative scene is set by lush greenery, mountains and pagodas.

This is the sequel to Panda’s Fortune and offers an improvement in terms of graphics – fans of the original will note that the quality of the icons and backdrop is sharper – while the rest is very similar including the 25 fixed paylines and high volatility. In fact, overall the gaming experience is so familiar that only die-hard panda fans will understand the need for another version! For Prgamatic, it’s simply a safe bet and an opportunity to put out a new game with proven appeal and a spruced-up front end.

The game will be available at the UK’s best slot sites from Spring 2021.

The 96.51% RTP in Panda’s Fortune 2 is slightly above average for online slots but in the mid-range for Pragmatic’s catalogue, while the highly volatile gameplay makes this most suited to players who enjoy a large element of risk. Pragmatic themselves rate it as a 5 out of 5 and with their history of high-risk thrillers, we can expect a lot of troughs and peaks and a very uneven distribution of wins, something that won’t appeal to casual slots players. So if you are looking for steady gameplay, you best look elsewhere.

The minimum bet of 25p is not the lowest, so it won’t be an easy play for lower rollers. The best you can take home from one spin is 4,998x stake, which is the top prize that can be triggered by landing gold versions of the high value icons.

Panda’s Fortune 2 is filled with symbols we’re used to seeing in Asian-inspired games, including the koi, toad, panda and yin-yang symbol. You’ll also find a bonsai tree, butterflies and purple lion statue. The values in the regular payouts are conservative with the top-paying butterfly symbol awarding up to 8x stake for 5 of a kind.

The panda is Wild and this symbol appears on reels 2, 3, 4 and 5, substituting for all the other symbols in the game, except the yin-yang Scatter. This yin-yang symbol is required to launch the big money Free Spins bonus game.

There are also golden versions of all the symbols, which can award an extra prize if they appear as part of a winning combination.

Panda’s Fortune 2 is a relatively simple game for a high variance slot – it isn’t a feature-packed Megaways™ experience, but rather focuses the action around the Golden Symbols and Free Spins round so it’s easy to follow and understand what to look out for on each spin.

Here is how it all works:

Every symbol in this game has a golden version, except the Scatter. These golden symbols pay the same as their regular counterpart, however when they appear in a winning combination, they also award an extra prize. This can be a random payout from 5x to 4,998x stake for a 5-of-a-kind win. The golden symbols can award a 2x stake prize for wins with 3 or 4 high-value symbols or 1x stake for 3 or 4 low-value symbols. The golden Wild adds a 3x stake bonus.

If 3 or more yin-yang Scatters appear on the reels, you’ll receive 12 Free Spins, along with a cash prize of 2x, 15x or 100x stake for 3, 4 or 5 Scatters respectively. During this round, whenever a golden symbol lands, the space is outlined in gold and only other gold symbols are allowed to land in that space for the duration of the round. If you hit 3 or more golden symbols, you’ll launch another 8 Free Spins.

Panda Fortune 2 is a sequel that may feel unnecessary to some as it doesn’t bring anything new to the table. Enthusiasts of Asian themes and pandas in general will enjoy this, but most players will be scratching their heads as to why Pragmatic Play bothered at all. This game features the same high volatility, the same 25 fixed paylines and the same golden symbol feature and Asian styling. Sure, this time we’re high up in the mountainside with the pagodas instead of in the forests but apart from that, it’s Panda Fortune again. However, the majesty and charisma of the giant panda cannot be denied and there are also some decent wins to be enjoyed from the golden symbols. It’s an attractive game but the high volatility will put off lower rollers and the lack of new features makes this only worth a spin for true fans of the genre.