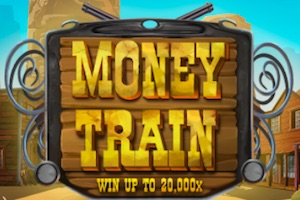 Money Train by Relax Gaming is a hugely popular, highly volatile and brilliantly original 40 line slot that transports players to a railway in a dusty Wild West town. The reels are filled with bandits and golden tumble weed icons that can land you 20x wins in the base game. But this slot makes its mark in its fantastic Money Cart Bonus Free Spins round where SEVEN multiplier modifiers and reel expanders come into play. Saddle up and spin to win up to 20,000x!

Over time Relax Gaming have cemented a reputation as one of the best in the new vanguard of slots providers, competing alongside names like No Limit City and Fantasma in the race to produce the most spellbindingly bonkers and rewarding high risk slots out there. With games like Temple Tumble Megaways, Dead Man’s Trail and Stanta’s Stack they have set a high bar, but it was Money Train and the follow-up Money Cart 2 that got gamblers most excited about the kind of compelling gameplay this team can deliver.

Money Train was released back in 2019 and immediately became a hit thanks to its original bonus round that was unlike nothing that had come before. The setting for the action is a typical Wild West town with bandits on the reels and an angry Sheriff watching over the scene. It begins with the money train rolling into the station and a standard 5×4 reel set appearing. Then the aim of the game is to trigger the Money Cart Bonus Round where the backdrop changes and all manner of multipliers come into play.

But before we get to that point, let’s run through the basics … 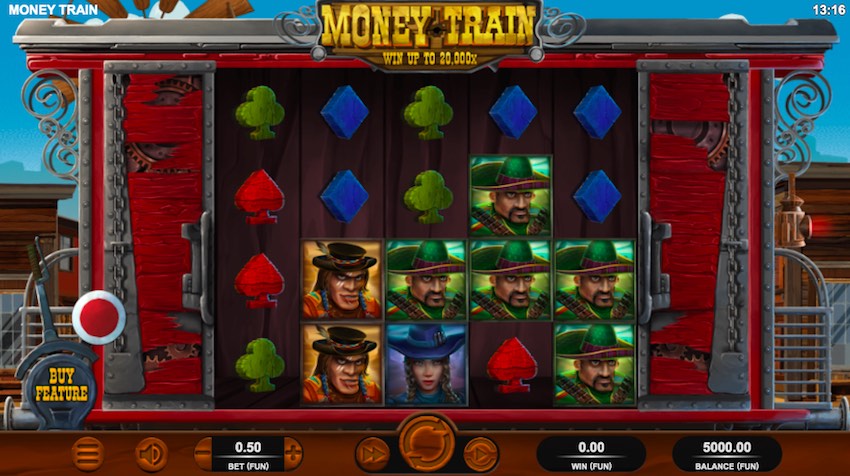 The RTP of Money Train is 96.2%, which is totally average, but which can be pushed up to 98% if you take advantage of the Bonus Buy feature available outside the UK only. Incidentally, this higher RTP is also the return in Money Cart Bonus Reels, the sequel to this game.

The minimum bet is 20p and along with the high volatility, this isn’t an easy play for risk-averse gamers. This is a most definitely a risky play, although the 20,000x stake top prize might be tempting enough to make you throw caution to the wind. This jackpot is also much better than that in the sequel, in which the top prize plummets to just 2,000x.

As you would expect, the artwork in Money Train is very good. There are more than a few high quality, high risk Western slots on the market now so Relax have had to work hard to keep up with the competition. The symbols are themed on a Wild West town, which is of course inhabited by ne’er do wells. The characters here include 4 bandits, while other main symbols are the lower value wooden card suits. During the bonus feature, new symbols appear which include the money safe and lots of golden tumble weed.

The symbols can also appear stacked on the reels during the base game.The best bandit pays up to 20x stake for 5 of a kind. There is also a Wild symbol, which is the crossed shotguns – this symbol can substitute for all the others in the game to create more potential wins.

At all times in Money Train there are 40 paylines active on the reels. 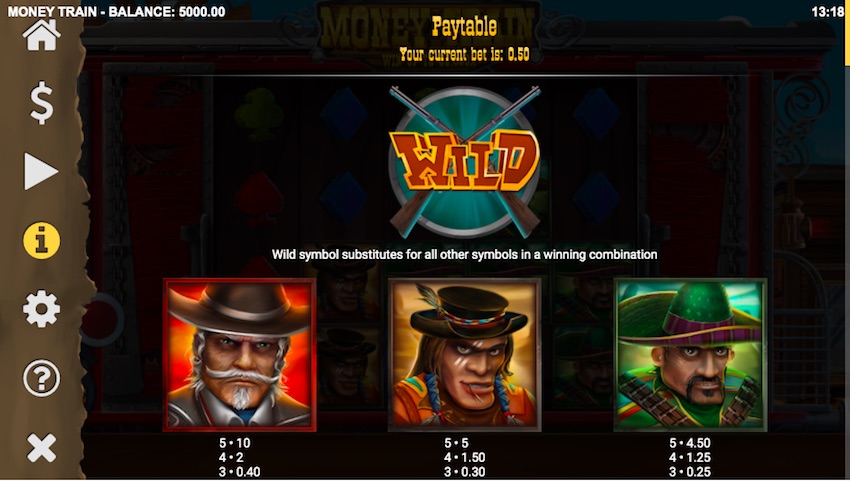 Finding an original angle for a video slot is not an easy thing to do these days but these top studios keep pushing each other to bring out something new to keep their fans interested. And in Money Train, Relax have absolutely nailed it. The Bonus Cart round we are about to explore is a killer – stacked with opportunities to deliver compelling progressive win sequences. But of course, it can frustrate too … so beware!

Landing the bonus symbol on reels 1, 3 and 5 will activate the Money Cart Bonus Round, which is the only feature in the game. The gaming screen will now expand to reveal 20 positions. It then works like this – you’ll get 3 Free Spins straight away and as long as new symbols keep appearing on the reels, the spin count will keep resetting. There are six modifiers in total, each with its own special power.

The other symbol in the bonus round is the tumbleweed, but this has no value of its own and it DOESN’T reset the Free Spin meter. It just adds an authentic Western feel and more visual interest to the bonus reels.

Bonus Buy – OUTSIDE THE UK ONLY

You can fast-forward your way to the bonus feature for a cost of 80x your bet. This will take you straight to the Money Cart Bonus Round and boost the RTP to 98%.

Money Train is a blockbuster slot with a very entertaining bonus round that can deliver huge prizes to a few lucky players. Indeed, there is evidence on big win videos of some epic win sequences from this game where punters have triggered the Widener Modifier to activate more reels and then hit a high value Persistent Payer or Persistent Collector. If that happens to you then you are well and truly in business and that 20,000x top payout might not look so far off. However, this game comes with a word of warning too. Having played it many a time we can say that before triggering that Money Cart Bonus you may experience some very frustrating spins waiting to unlock it with not much action in the base game. Then when you do enter the free spins the gameplay is ruthlessly volatile and the potential for high payouts is offset by a very tight maths model.

So keep this all in mind if you decide to give Money Train a spin. It’s a devilishly good slot but one that needs to be treated with the respect it deserves!

Our Guide To Good Slots Play