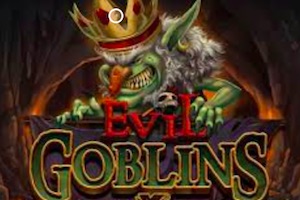 Right now we are massive fans of No Limit City here at All Slot Sites. Their maniacal brand of slot game rarely lets you down and the dark and terrible themes they regularly tap into – from notorious prisons to mental asylums – are perfect for the no-holds barred maths models that these games run on. It all adds to the sense that you are entering an extreme gaming zone everyone time you load up one of their slots. So it’s always exciting to break the seal on one of their new releases. And from the outset, Evil Goblins xBomb looks like it has the potential to be a beauty.

The game has distinct echoes of their earlier 2021 release, Fire in the Hole xBomb, utilising the same Cascading Wins and on-reel explosions to mix up the symbol patterns on a regular basis. The setting is also an underground one, this time the lair of some troublesome green men with terrifying teeth who guard piles of gold. These mischievous characters will both aid and frustrate your gameplay so watch out for them.

The backdrop is a cave with flaming torches on the walls and bags of gold coins on the ground – presumably the goblins’ treasure and one you must try to get your hands on. The action takes place initially on 6 reels with 3 rows, but the xBomb feature can expand the screen to 7 rows and give you more paylines in the process.

The game is certainly characteristic of No Limit City slots in general, which are known for their high volatility and slightly sinister themes!

Evil Goblins is busting out at all new slot sites in the UK right NOW! 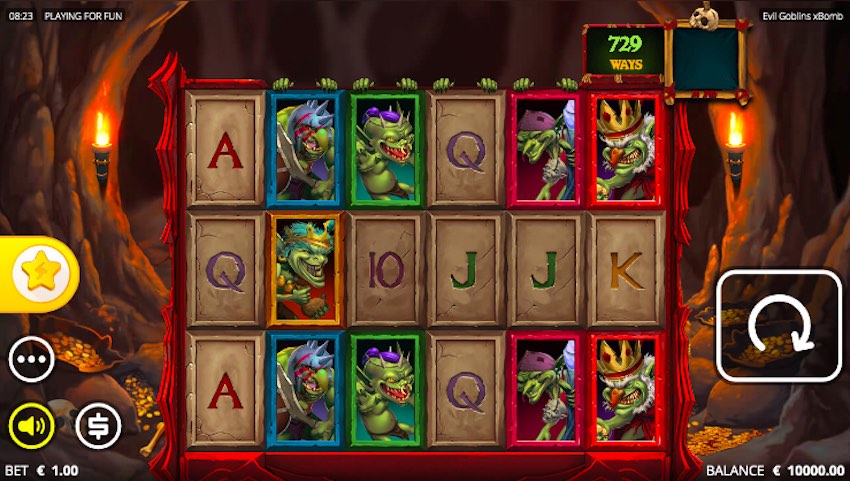 Onto the maths and we should note that whilst the RTP of this slot starts at 96.06% it is variable and can rise to 96.96% with the feature buy option. Note, however feature buy is not available in the UK under the latest updates to regulation. The variance is of course super-high and we urge you to tread carefully when you play this game. Take a punt with the minimum bet of 20p to start as it will burn through your balance in no time. This is a slot for those who like high risk levels!

The maximum payout of 31,969x is not as high as other No Limit Games – in particular San Quentin xWays – but it’s still better than most. You’ll need to get busy with the higher level multipliers (55x) to get anywhere even close to this, but it is an indication of the kind of prizes the game can trigger.

NOTE: NLC themselves publish hit frequency to be around 2 in 5 spins and the chances of hitting that jackpot to be 1 in 55 million spins.

Wins are triggered in Evil Goblins in the normal way when three or more identical icons land on a payline from left to right on adjacent reels. The game also uses the popular avalanche feature to drive successive wins from one spin. More on that in a moment.

The symbols are all themed around the goblins and their evil lifestyle. This includes 5 green goblin characters in different outfits, such as crowns and helmets and purple hats, along with skulls and barrels of dynamite.

The goblins award from 1x to 3x stake for 6 of a kind, with the goblin wearing a ruby-encrusted crown awarding the best payouts. There are also high cards, from 10 through to Ace, to award the lower rewards, while you’ll see the goblin characters above the reels waiting to award bonus features. 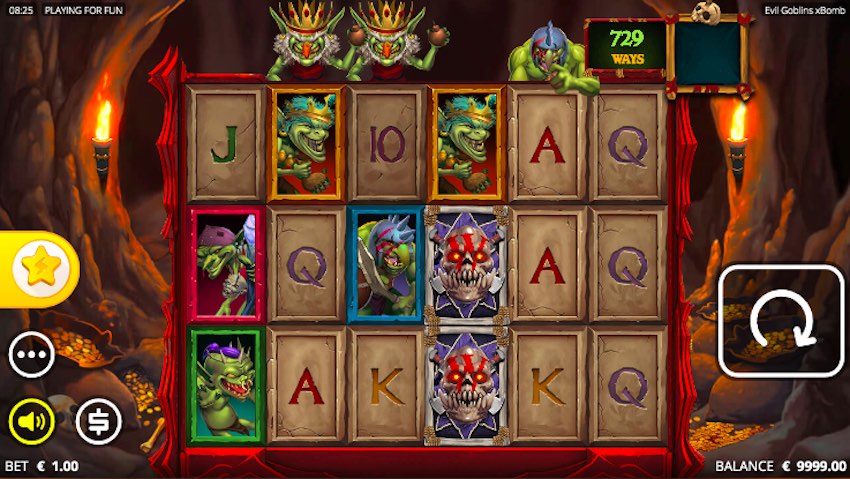 Extreme volatility is too risky for some

Like all good No Limit City slots, Evil Goblins comes with a lot of features. Fortunately, they trigger quite regularly so even though the variance is high and wins can be sparse at times there are still plenty of events happening on screen to keep you entertained through the lean spells.

The avalanche feature is a regular in online slots these days. It means that when you hit a winning combination, winning symbols disappear to be replaced by new ones, giving you more chances to score wins again. The process keeps repeating until no more wins are generated.

We absolutely love this little feature! Animated goblins appear above the reels and if a matching goblin appears on the same reel beneath, then the naughty character will throw a grenade to turn that symbol into a Wild. After throwing a grenade, the goblin disappears to be replaced by a random new one. Cool stuff!

The regular Wild can substitute for other symbols to create more potential wins as standard. The Dead Wild stops winning combinations of symbols from linking. But if you land 3 Dead Wilds, they turn into Resurrection Wilds, which can substitute as normal but also get you a Multiplier – 3, 4 or 5 Resurrection Wilds will award an 11x, 33 or 55x Multiplier! These are vital in creating the bigger payouts.

xBombs, familiar to those who have played Fire in the Hole, remove any adjacent symbols around the explosion, except for Resurrection Wilds, Dead Wilds and Scatters. xBombs also increase the Multiplier by 1x when they explode and add one more row to the reel, up to a maximum of 7. Each extra row increases the number of paylines in play. During a Cascade sequence, xBombs always explode between each cascade regardless of whether or not there was a win.

If the same goblin appears above all the reels, you’ll trigger the Evil 4 feature, giving a 4x Multiplier with the chance to increase this by 1x each time a new matching goblin appears. The 4x Goblin will appear above the first reel and when a matching version appears on that reel it counts as 4 instances of the symbol.

Hitting 3 or 4 Scatters awards 8 or 9 Fresh Meat Spins and things get real around now!

Here you’ll get Dead Wilds on EVERY spin, while each Scatter during this round awards another Free Spin too. If Evil 4 triggers, you’ll receive an enhanced version of the round called Goblin Feast Spins. If the Scatters land at the same time as xBombs, you’ll receive Explosive Fresh Meat Spins with GUARANTEED xBombs.

Goblin Feast Spins can be activated via the Bonus Buy option (outside the UK) or when triggered from Fresh Meat Spins. You’ll get 4 Spins with Evil 4 activated, which gives progressive Multipliers. If 2 xBombs appear during the feature, Explosive Goblin Feast Spins are triggered with guaranteed xBombs.

You can buy into any of the features for a price outside the UK.

Evil Goblins xBomb is another slot from No Limit that combines superb design and artwork with unique and thrilling gameplay. It’s probably not quite as strong as other recent releases – San Quentin and Fire in the Hole in particular – but it’s still a really great game. And with perhaps a little more give in the hit frequency than those games, it is a slightly more forgiving play. But let’s not kid ourselves, this is still a No Limit slot and one with some pretty vertiginous volatility going on.

We should also give a mention to the artwork in this game. It is undeniably great to look at too – the goblins in the game are openly labelled as evil and have particularly disturbing features, which is typical of No Limit City’s approach – remember San Quentin xWays with its brilliant yet disturbing scenes of insane criminals in strait jackets?

And in terms of top prizes – well 31,969x is not to be sniffed at, even if it’s a little short of other NLC games. To get close you’ll need to be landing lots of xBombs to drive up the multiplier and increase the rows and paylines and hope to land the Goblin Meat Spins.

One thing is for sure, this slot will ALWAYS be entertaining. Just note that the extreme volatility means the gameplay is dangerous and many cave explorers could fall foul of those evil goblins!