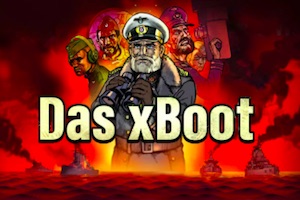 There can be no debate that No Limit City are creating some of the most interesting and compelling high-risk slots on the market right now. From high energy, high potential games like Book of Shadows and Fire in the Hole to this extraordinary WW2 slot, they just keep breaking the boundaries with each new release whilst matching their frenetic and dangerous gameplay with dark and frankly disturbing themes. So, it’s always a total thrill to load up the latest release and find out what NLC have been up to in their lab this time round!

From the outset Das xBoot is like no slot we’ve seen before. There are few war-time games around and certainly none based on the smash-hit 1981 film from Germany, Das Boot. The movie is all about U-Boats bombing allied warships during WWII as told by real-life veteran Lothar-Günther Buchheim. As we said, its intriguingly dark, but if there is a developer that could get away with a wacky or disturbing theme, then it’s this one. Just think about San Quentin xWays with the videos of insane criminals, or if you want to go even more extreme, check out Mental at any or our recommended new casino sites today.

Now to begin we are dropped into the cold Atlantic, a murky ocean setting featuring a submarine, while an army green reel set dominates the foreground. The 6 reels are laid out asymmetrically with an unusual 2,3,4,4,3,2 row formation whilst a moody soundtrack and various submarine features, pipes and meters dotted around add to the eerie sub-aquatic atmosphere.

What else is out there in the gloom? Let’s find out. 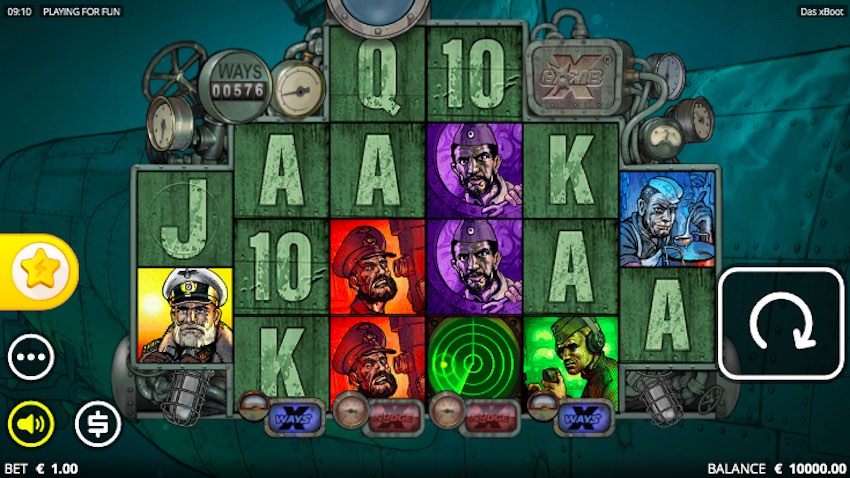 The RTP of this slot is 96.05%, which is average for online slots. This can be increased by taking advantage of the Feature Buy option (outside the UK only) to guarantee entry to the Free Spins rounds.

The minimum bet is 20p and it hardly needs saying that the volatility level is rated at the maximum – 10/10 according to NLC. The game is therefore suitable for players with high bankrolls and those who enjoy risky gameplay in the hunt for the big prizes. The maximum payout of 55,200x stake is enticing, but bear in mind the hit rate for that is 1 in 65 million spins! There are plenty of features to help drive up the payouts though as we shall see in a moment.

The reel set in Das xBoot is variable and you’ll notice that as bonus features are triggered extra reels and rows are added. That means the number of paylines can alter from 576 right up to 75,712 depending on the mode. But the basics remain the same – score wins by forming paylines of identical symbols of 3 or more in length from left to right.

The symbols themselves are all themed around submarine life with the crew members taking centre stage on the reels. You’ll find 5 characters: the radio operator, cook, captain, engineer and periscope operator. There are also the high cards from 10 through to Ace to award the lower payouts. The captain is the highest-paying symbol, awarding 20x your bet for 6 of a kind. 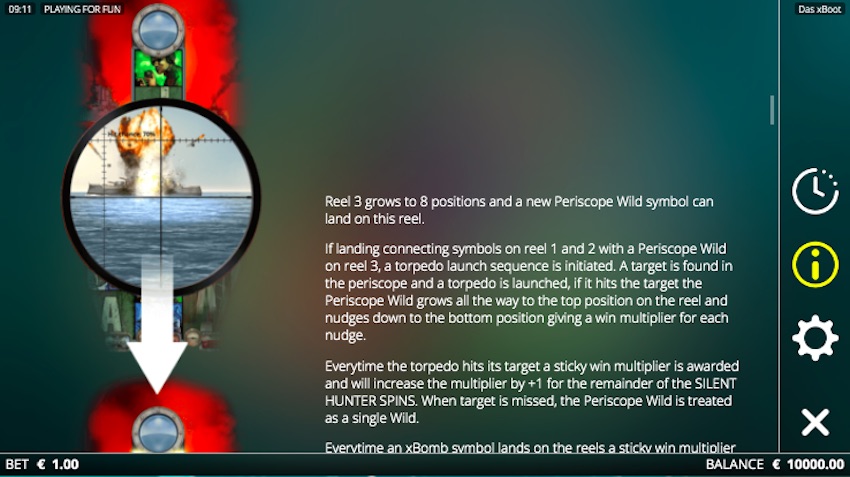 It is no exaggeration or sales pitch to say that this game is packed with features. It’s like a best of from No Limit City, combining xNudge Wilds, xWays and two free spins modes with extra reels, rows and a torpedo animation!

xNudge Wilds appear in a few good NLC slots including their Western, Deadwood. Here, they can land on reels 3 and 4 only. They are Expanding Wild symbols that always nudge up or down until fully in view. With each nudge a Multiplier increases by 1x. Any additional Multipliers from the game – and there are a few – are added to that from the xNudge Wild feature and applied to your win.

The xBomb Wilds in this game explode and remove all non-winning symbols from the screen, to be replaced by new ones. They also increase the games overall Multiplier by 1x whenever they land. xBombs Wilds become standard wilds after the explosion whilst remaining symbols after the explosion drop to the bottom of the grid and new ones drop in to fill the rest of the reels in a Cascade. Any multipliers visible are carried through to the free spins round at this time if it is triggered.

The xWays symbol is another feature that appears in many NLC slots. These Mystery Symbols can appear anywhere on reels 2 or 5. When they do, then they reveal a random symbol from the paytable. If there is more than one xWays on the reel after a spin then each instance will reveal the same symbol to increase the odds of triggering a payout.

Things really heat up in the free spin modes, of which there are two. The Sonar Scatter is your friend here and its appearance will set off these frenetic sessions of gameplay.

During Silent Hunter Free Spins, the reels are transformed into something more like a sub as the 3rd reel increases to 8 rows high like a periscope searching out for enemy vessels. When these extra rows are in play, if a Periscope Wild appears on reel 3 with 2 matching symbols on reels 1 and 2, then a cool animated torpedo launch sequence is activated and an extra 1x Multiplier is added to the game multiplier value. There are different outcomes from the animation – if the attack succeeds then the wild nudges up or down to fill all of reel 3, adding 1x to the multiplier as it does. If the attack fails then the Wild remains as a single symbol.

Any more Scatters in this mode add 2 more Free Spins to your total.

When this happens, a new torpedo reel appears beneath reels 2 to 5. They can be occupied by new Torpedo Wilds which add xWays symbols with Progressive Multipliers which increase by 1x with each successive Topedo Wild that lands, up to 9x maximum.

When all 4 positions on the torpedo are filled, so the torpedo launches from your virtual sub, revealing multiple xWays symbols behind it. Now, we definitely can’t say we’ve seen that in a slot before! The torpedo launch also adds 1x to your multiplier total. On reels 2 and 5 of the torpedo reel, your xWays transform into normal symbols and on reels 3 and 4 they become wilds.

Once again, any more Scatters in this mode add 2 more Free Spins to your total.

Just on a visual level, xBoot is pretty stunning with its eeire mix of murky ocean depths, gun metal grey sub and nervous-looking crew members. And of course, it’s not often you meet a war theme or submarine in a slot, let alone one based on a grievous battle from WWII. To their credit NLC have set the bar pretty high for themselves over the last few years with the themes and narratives of their games and they have to keep hitting those highs to keep their fans happy. Once, they haven’t let us down – from the artwork to the way the features are weaved into the story, it all makes good sense.

As far as gameplay goes this is complex and intricate slot as a lot of the best stuff relies on symbols dropping at the same time to interact with one another and one event triggering another to produce higher multiplier values and greater potential. No more so than in those two excellent free spins rounds. Our favourite is the Wolf Pack Spins – the tension mounts as you try to complete the full reel with Torpedo Wilds to launch your missile and reveal the xWays symbols beneath. All the while adding value to your multiplier for the final pay off! It’s really fun and engaging slot play and you can see why this studio’s inventiveness is giving rivals like Big Time Gaming a run for their money.

We should say that predictably, there is also huge, huge volatility in this slot so you can expect long lean spells. But having said that there is the chance to pocket some great payouts if the sequences in the free spins round fall your way. And those events will be epic when they arrive! Meanwhile, the 55,200x may be a one in 65 million shot, but the size of that jackpot suggests lesser but still five-figure prizes could be within reach for those daring enough to take this game on.

In conclusion, as well as high risk slots fans, those who enjoy war films and especially Das Boot will find this game particularly fun and exciting to spin. Hats off once again to No Limit City for creating another truly unexpected slot. Now go and get ready for an epic high seas battle and find out if this one is going to float your boat!