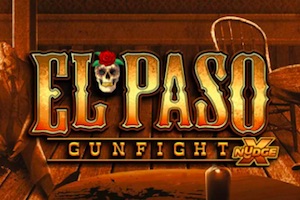 El Paso Gunfight xNudge is a highly variance Wild West slot from Nolimit City based a legendary shoot-out from 1881. This is a feature-packed game stacked with multipliers, wilds, free spins and expanding reels that can go off on any spin. The artwork is high quality with gunslingers, skulls and flaming pistols. Nolimit’s infamous xNudge Wilds are in action and the top payout is a 44,440x bounty!

The awesome Nolimit City from Australia are flexing their muscles once again in this wild west showdown that follows in the footsteps of the excellent Tombstone and Deadwood games from the same studio. The El Paso gunfight is an infamous event in outlaw history, an gun battle from 1881 which slay four men, earning it the title, ‘Four Dead in Five Seconds’! The reels feature the four characters from the day, including famous El Paso law-maker, Dallas Stoudenmire.

And in true Nolimit style, the crackling atmosphere of the wild west has been recreated with sharp illustrations, against the backdrop of a soundtrack that includes gunshots sound and shattering liquor bottles. In fact, One of the most exciting aspects of this slot is the sound track, which is reminiscent of the music from the iconic spaghetti Western ‘The Good, The Bad and The Ugly’! We’re thinking of the scene where bandit Tuco frantically searches the cemetery for the buried gold, accompanied by Ennio Morricone’s dramatic score!

So with the atmosphere established, what about the gameplay itself? Well it certainly doesn’t disappoint as we are about to explain – it comes packed with cool and exciting features that can burn you or pump up your balance in moments. Its playable at all good slot sites from May 2021. 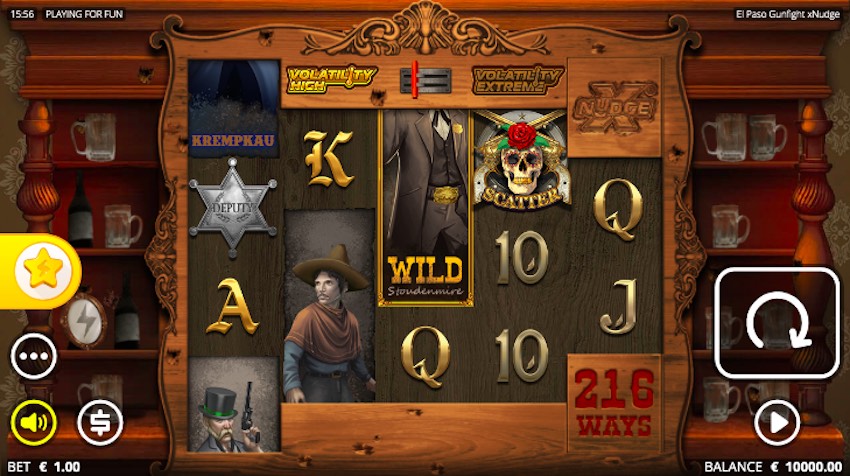 It’s the little details that make Nolimit City slots rise above the pack, and once again the creative juices flow as they have produced a customisable reel set up here with the option of playing the reels in a high variance 4-3-3-3-2 layout or an even more volatile 2-3-3-3-4 formation! It’s your choice to play at the level you choose, though note that neither are particularly forgiving.

Meanwhile, in the same way that the reel set up is changeable, so is the RTP, which can be at 94.24% or 96.06%, depending on the number of active paylines in play, which is up to 43,332 when the reels are fully expanded.

Those who are not used to this style of game should note that due to the extreme volatility, there are huge ups and downs in payouts in El Paso Gunfight. For this reason, it’s best to bring a decent bankroll to the reels, especially as the minimum bet is a not-so-low 25p.  In short, this slot is best suited to players who enjoy risk and if you have the right combination of nerve and luck, it can pay richly with a maximum win of 44,440x stake. For more on slots variance, check out this guide.

The symbols in El Paso Gunfight xNudge include the men involved in the El Paso battle: Marshall George Campbell, John Hale, Constable Krempkau and an unnamed Mexican bystander. Lawmaker, Dallas Stoudenmire features as Wild symbol, along with gold and silver badges and a skull and crossed pistols symbol as Scatter.

High cards award the lower payouts, while the characters pay the highest rewards, giving 2 to 6x stake for 5 of a kind. The best payouts come from the bonus features, including some really powerful Multipliers that allow you to win up to 44,440x stake. 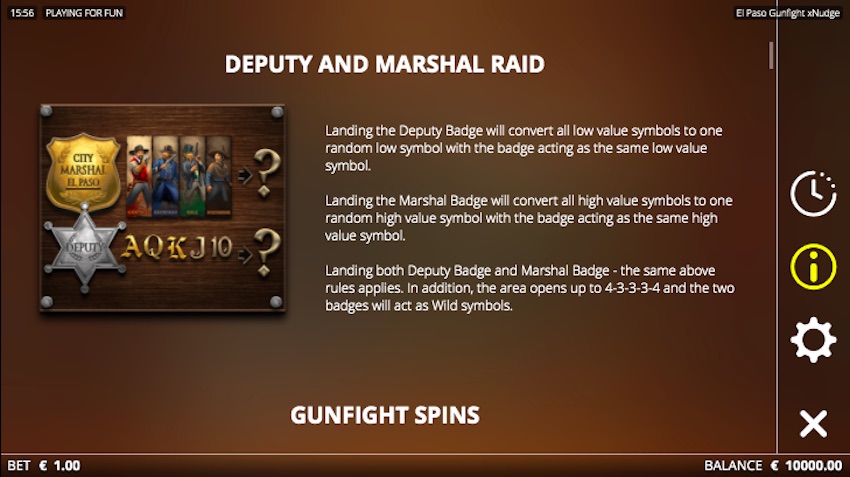 Like we say, there is no shortage of features on El Paso Gunfight, from the usual xNudges to Wilds, Free Spins in two formats, and ReSpins. Here is how they all work:

Expanded Wild symbols appear on the middle 3 reels and for every Nudge, the Multiplier increases by 1x. Multipliers can be added together if more than 1 appear.  This is Nolimit City’s trademark feature, and one that fans of games like Bushido Ways xNudge and Halerquin Carnival will know this little beauty well!

At the same time, when BOTH badges appear, the win ways expand to 43,334 (the reel set transforms to the 4-3-3-3-4 layout) and ALL badges transform into Wilds to enhance the odds of hitting a win.

Landing all 5 characters on one spin expands the Wild symbol to cover the entire middle 3 reels and a Respin is awarded, including ANY Multiplier.

When this round begins then the Scatters transform into Jumping Wilds, which move across the screen on each spin. If these Wilds land on a Stoudenmire Wild, any Multiplier in view is doubled. And during the round, landing the badges awards an extra spin and triggers one of the following bonuses:

El Paso Gunfight xNudge is a complex slot with a strong theme, dramatic sound track and lots of ways to win. The features are sophisticated and it’s hard to keep track of what’s going on at times. The longer you play though, the clearer everything becomes, but this is so volatile you’ll need a good bankroll to last through the lean spells. The customisable layout options offer volatile or extremely volatile play, so there’s not much choice here for low rollers. If you enjoyed Nolimit City’s Deadwood and Tombstone slots, you’re sure to love El Paso Gunfight xNudge. Although this is not as visually appealing as its predecessors, EL Paso boasts a higher jackpot and a cracking sound track, which can’t get much closer to ‘The Good, The Bad and The Ugly’ without paying royalties! Nolimit City clearly loves its Wild West slots and if you do too, this is a gunfight not to be missed.