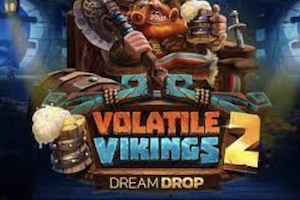 This high variance slot takes us back to Nordic times and plays out on a 6x5 grid. A scatter pays mechanic brings up wins for 8 or more symbols across the reels. Multiplier Reveals and Win Cascades drive up your payouts in base game and free spins round to 10,000x. And the Dream Drop feature triggers at random to open up the chance to win £1,000,000 or more!

The brilliantly named Volatile Vikings 2 was the third in the Dream Drop series of slots to be released by Relax Gaming back in July 2022, following on from Temple Tumble 2 and Snake Arena Dream Drop in May and June respectively. This sequel has almost identical gameplay to the original version with the addition of the hugely popular Dream Drop jackpot series which had by September 2022 already paid out over 500,000 prizes including THREE Mega Jackpots.

The setting here looks like the inside of a Viking home with wooden tables, beer barrels and circular windows providing the backdrop to a wooden-framed 6×5 grid on which the action plays out. The gameplay is relatively straightforward – win cascades, multipliers and free spins are the order of the day but Relax give it their own twist by using counters to unlock the multipliers.

Volatile Vikings 2 has been a fixture at slot sites in the UK since July 20th 2022 and you can find it at any site that features Relax Gaming slots.

Volatile by name and volatile by nature, these Vikings take no prisoners. So be ready for some seriously high-risk slots action. Here is the maths:

This is another finely crafted game with pleasing graphics and some high value symbols whose rewards can be even greater when combined with Persistent Multipliers (see later in the review).

Here are the highlights of the paytable:

Light on features
No Wild symbols in the game

Just like the original, when a win is triggered, ALL winning symbols are blasted off the grid to be replaced with new ones. If new wins are formed, so the process repeats, until no more wins occur.

The Multiplier base game feature uses a clever Counter system to unlock multiple multipliers in each cascade sequence.

On EVERY spin, Multiplier Reveal symbols land on reels 3 and 4 showing a Counter and an associated Multiplier. The Multiplier only becomes active when the Counter is brought down to Zero. Its value is reduced by 1 with EVERY consecutive cascade.

These multipliers blast all symbols directly adjacent to their position causing further cascades in which MORE Multiplier Reveals will land. Once all Multipliers have played out the win value for the entire sequence is calculated and the total value of ALL Multipliers revealed is applied to that win.

This progressive sequence of Multipliers can create some stunning wins and edge-of-the-seat excitement!

To unlock the free spins you’ll need to land 3 Volatile Vikings Bonus Symbols (6 free spins) or more (1 extra spin for every extra scatter after the 3rd).

The rules are the same here EXCEPT that the Multiplier Reveal Multipliers are PERSISTENT BETWEEN spins.

Plus … you get an extra free spin for every extra bonus symbol that lands in the round.

Like other games in the series, the Dream Drop Jackpot feature here is randomly triggered. When it happens, a new reel set appears. There are 5 reels, each a different height and  representing one of the five jackpots which are seeded as follows:

The feature plays out as DD symbols OR blocks land on each reel. The blocks will be blasted out, but the DD symbols remain. When a reel is filled, it’s jackpot is triggered and the feature ends.

NOTE: You are GUARANTEED to win ONE of the jackpots when this feature triggers.

Fans of Volatile Vikings 2 will also like these two games from the Dream Drop series:

Wild Chapo Dream Drop – Another slot re-worked for the Dream Drop series is 2021’s Wild Chapo, a Mexican-themed game set in a road-side bar. The volatility is a little lower at 4/5, but the top win is a match for Volatile Vikings at 10,000x. It is NOT a scatter pays game, but instead has 15 paylines. If you prefer slots with wilds then this is a good recommendation – it has expanding wilds that stick and produce multipliers too! The RTP is 94%.

Snake Arena 2 Dream Drop – Also an early Dream Drop release is this re-working of the 3-d slot inspired by the classic ‘Snake’ mobile phone game. In a knights castle, a giant snake is loose, chomping on terrified knights and forming wilds as it goes. The gameplay is very different to Volatile Vikings with the focus on driving wins via expanding wilds, whilst there are no win cascades. It’s fun, however the top win is significantly lower at just 2,758x.

We also recommend these slot sites for Relax Gaming slots:

Voodoo Dreams – A slot site with a supernatural theme from SuprPlay, Voodoo Dreams has over 1,000 games to try. You can deposit and play with Paypal and other eWallets, and withdrawals are processed super-fast. lt is fully licensed by the UK Gambling Commissino and offers 50 Book of Dead spins with your opening deposit.

MrPlay – This Aspire Global casino is popular in the UK thanks to its massive game catalogue that takes in over 50 game suppliers, including Relax Gaming. You can pick up a 100% match bonus up to £100 and deposit and play with Paypal as well as bank cards. We also love Mr Play because they offer a big range of Megaways™ games from BTG and partners.

Volatile Vikings 2 Dream Drop is another high-class production from Relax Gaming. In truth it is almost a clone of the original game, with the exception of course of the Dream Drop feature. So if you liked the first one and also like the idea of hitting a £1,000,000 payout then you should definitely give this a spin!

The highlight of the game is the free spins round where there is lots of potential for epic big win sequences. Progressive cascades that unleash more multipliers that combine and add value across the entire round are nothing new – we see it in games like Bonanza for example. But the execution here with the counter system makes Volatile Vikings stand out from the crowd and we fully expect some awesome big win videos to follow in time. For this reason, we highly recommend this slot to high-risk slots fans.