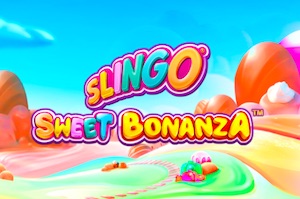 Pragmatic Play’s classic sugar-filled slot gets the Slingo treatment in this high variance version of the slots-bingo hybrid. Score Slingos and climb the pay ladder to drive up your payout with the help of free spins, wilds and super wilds. A pick me bonus round applies multipliers to your payouts, with more picks the higher you get. Win up to 1,000x per game.

The Slingo Originals team from London are pushing out some seriously good games right now, thanks in part to their partnerships with big names in slots like NetEnt, with Slingo Starburst, Scientific Games with Slingo Rainbow Riches, and now Pragmatic Play with this sugary little gem, Slingo Sweet Bonanza. If you are a fan of the bingo-slots hybrid – and you can find out more in our new Slingo Guide – then you will surely love this latest incarnation. And if you love Pragmatic Play’s original Sweet Bonanza then you have reason to taste the fun of Slingo for the first time too!

Sweets and slots seem to fit well together, as Hacksaw’s recent Tasty Treats shows us. And in this instance the bright colors, fantasy-land backdrop and Haribo-style fun on the grid is enough to make anyone’s mouth water. As far as gameplay goes, Slingo Sweet Bonanza follows the standard Slingo template, but with one added bonus round. It’s not re-inventing the wheel but trying to hit that Full House is fun nonetheless. Keep reading this review to see how it all works then browse our list of Slingo Sites to find out where to play. 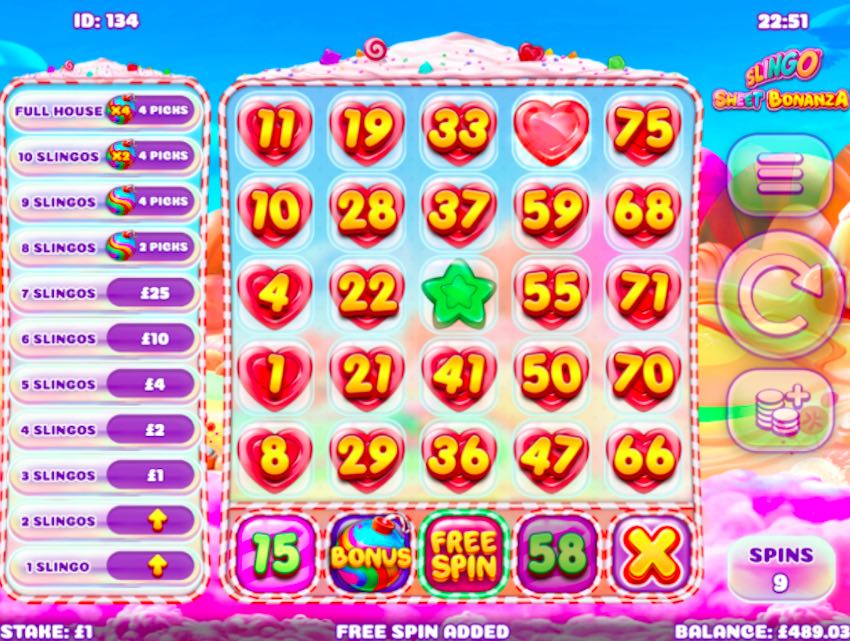 Most Slingo games operate in a low to average RTP range, some down at 95% but most, like this one, at 96%. That isn’t bad, its slightly under what you get in your average slot, but this is Slingo so the format is different. The variance in Slingo Sweet Bonanza has been rated at 5/5 by Slingo Originals themselves, making it a high volatility game in the same mould as Slingo XXXtreme or Red Hot Slingo. The top payout is 1,000x which is higher than average.

The objective here is to cross numbers off your Slingo grid as they appear on the reels. But you get extra help from some special symbols as follows:

The paytable is easy to understand – just refer to the prize ladder to the left of the screen. There are prizes awarded for up to 11 Slingos scored, with higher value the further up the ladder you climb. This is what you get based on a £1 stake: 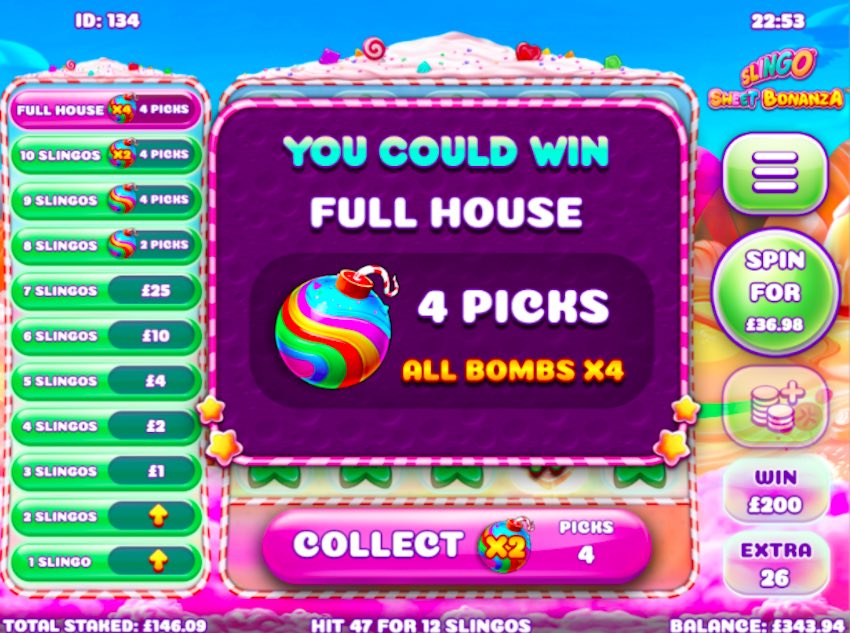 Less features than other Slingo games

If you are new to Slingo here is a summary of the basic gameplay.

The action plays out with a bingo card or 5×5 grid at the centre of the screen. Underneath the grid is a reel with 1 row and 5 symbols on it. As the game begins the player has 11 spins. More are added each time a Free Spins icon lands on the reel. So watch out for those.

With each spin 5 numbers are revealed on the reel and where they match those on the card, the ones on the card are crossed off. The objective is to cross off 5 numbers in a vertical, horizontal or diagonal line to create a Slingo. The extra Wilds, Super Wilds and Free Spin icons will help you to get your Slingos more quickly.

Pick Me Bonus Round

The bonus round can be triggered either by hitting 8 or more Slingos or by landing three or more bonus icons on the reel in one spin. Those who have played Pragmatic Play’s Sweet Bonanza Slot will recognise the Sugar Bomb bonus symbols from that game. They appear in the Pick Me screen and you must choose one from four to reveal a multiplier value that is applied to your win so far.

You get up to FOUR picks for nine or more Slingos with additional multipliers for 10 Slingos (2x) and 11 Slingos (4x).

At the end of the bonus round there is a lollipop hunt. If you find the Lolipop then your re-trigger the bonus. If you don’t, then the round is over.

So, it may be simple game but you can see how at the top end of the pay ladder there is the chance to score some major big wins as the multipliers combine.

Sweet Bonanza Slingo is another cool addition to the growing catalogue of Slingo games worth taking a punt on at top UK slot sites. The design is super eye-catching but the gameplay isn’t particularly original and having got used to more sophisticated add-ons like the slots reels in the bonus rounds in Slingo Starburst and Book of Slingo, some may be a little disappointed at the simplicity of the Pick-Me Bonus on offer here. But maybe they would be missing the point because this game isn’t about having tons of features but rather it is all about the high variance and the relatively high prize potential that can be unlocked by combining multipliers at the top of the pay ladder. When you hit a good run of Pick Me bonuses and a re-trigger or two, things can get very tasty indeed!

As ever, if you are going to play, watch your stake value – it’s better to start at the lower end to make your balance last as all high risk games can eat up balance in no time. Be ready for that, and above all, have fun!