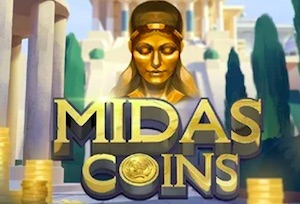 Midas Coin from Quickspin is a high volatility slot with an Ancient Greek theme and a narrative based on the tale of the King whose touch turned everything to Gold. A curse in the legend, but maybe a blessing for slots fans if the reels land right for you. The features are simple – it’s all about free spins and coin multipliers, but the 5,000x top payout is an enticing one and the opulent graphics

Quickspin is a game developer who specialises in high quality games with top production values and compelling gameplay. Highlights of their back catalogue like Big Bad Wolf and Sticky Bandits showcase this talent, and Midas Coins is another supremely cool-looking game, bathed in Quickspins trademark orange colors and boasting some top-quality reel action.

The story of Midas, whose wish of turning things to gold by touch came true and turned into a curse, is one we all know. But we’re not here to ruminate on the moral of that story – we’re here to see if Midas Coins can truly turn your bankroll into gold! And by the looks of things the opportunities are pretty decent – the features are simple, with a strong free spins rounds and multiplier coins driving up the wins. You can find out for yourself at most new slot sites from April 2021.

Midas Coins is ‘coins’ in name and coins in nature … this slot has a solid 96.02% RTP putting it in the mid-range of Quickspin slots and giving it a decent enough pay model. Stakes start at just 25p and the top payout is a hefty 5,000x your stake – you’ll need to be in the free spins round to get even close to that. And finally, remember that this is a high variance slot, so it’s pay distribution is going to be fairly tight – long spells with no wins before a short sharp payout rush. Beware and set your stake accordingly.

Find out more about slots variance in this guide.

With an ancient Greek theme, this game features iconic symbols from the era – coins, rings, necklaces and Gods. The most rewarding standard symbol is the necklace that pays 32x your stake if you land 5 across a payline.

Look out as well for the gold statue of Marigold which is the wild symbol which replaces all symbols apart from the scatter to form winlines and offers payouts of up to 32x stake per payline. And importantly, The Satyr is the scatter symbol – landing 3 or more will trigger the Free Spins bonus round where big wins are possible. Also be aware of Midas, which is the money collect symbol that comes into play during the Midas Coins bonus feature and includes multipliers.

Stands out in a crowded slot category
5,000x max win amount
A good variety of bonus games
Good choice of stakes from 25p

Could be too risky for casual players

Like all good high variance games, Midas Coins is all about triggering the features and getting progressive wins in the bonus rounds. Here is how it all works:

The Midas Coin can land on reels 1 through 4 and comes with multipliers attached. The coin can deliver payouts of between 1x and 500x your total bet. If you land the Midas on reel 5, the coins will become active within the Midas Coin Collect feature in which Midas will collect all the coins before adding them together for a total prize payout.

All is Golden Free Spins

The Midas symbol is also central to the All is Golden Free Spins feature.

To trigger the Free Spins round you need to land the Satyr Scatter symbol on reels 1, 3 and 5. This will deliver 2x your stake before opening up with 12 Free Spins. During the round, you will see a stack of coins that starts at 3x your stake on the first spin. The value of each Midas coin symbol that lands during the round are added to the coin stake. If you land Midas on reel 5 then the coins are collected, but the action doesn’t stop because the stack continues throughout the feature.

You can land Midas on reel 5 multiple times to collect your stash, and if you hit the 3 scatter symbols again, you will re-trigger the round.

So it’s clear that in the free spins round things can pick up pretty quickly with coin stacks and re-triggers, and it’s here that the 5,000x top payout can be reached.

Quickspin’s ancient Greece-themed slot is one of those games that is far more exciting than it looks. The theme might not be that original but the styling, graphics and gameplay lift this title to another level.

The game’s bonus features are where the fun levels really start to rise, and as you can see, if you manage to stack up the coins during the Midas Coins feature, then you’ll be in for some Godly payouts!! So, if you enjoy simple, but potentially very rewarding gameplay then Midas Coins is a great choice to play right now.

Adam is a veteran in the online gaming industry with over 10 years of experience in senior marketing positions across some of the biggest names in the industry including PlayOJO, Party Poker, Betway and many more. When Adam isn’t marketing gaming brands, he likes to travel on his motorbike and see the world.