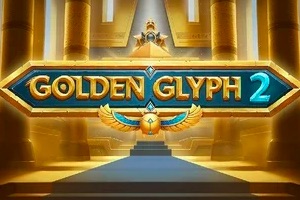 Golden Glyph 2 is a high variance grid slot with an Ancient Egyptian theme, the follow up to the original Quickspin game. A scorching desert setting gives way to a 7x7 grid with stunning, luxurious icons. Cascading Wins and Wild Power Glyhps boost the base game wins and multiplier wilds of up to 50x help towards a 26,800x top payout in the free spins round.

The original Golden Glyph by Sweden’s Quickspin was their first attempt at a Cluster Pays game and boasted a typically resplendent backdrop and reel set cooked up by this studio’s reliably strong design team. In the end though its mix of wilds and free spins wasn’t anything particularly new and loading up the sequel for the first time we’re hoping for a bit more invention in the mix.

And the good news is … that’s exactly what you get – a stunning desert vista in front of which sits a slick and gleaming 7×7 grid on which the action comes thick and fast. The variance has been pumped up, the top payout is now considerably larger and there are more Golden Glyph wilds and multipliers than before and an elaborate Power-Up function that gets you more enhancements as you unlock each new level.

We’ll come onto all that in a moment, but first the basics, and Golden Glyph 2 pays out for any cluster of 5 or more identical symbols with the standard cascading wins model in place, and stakes starting from 20p per play. 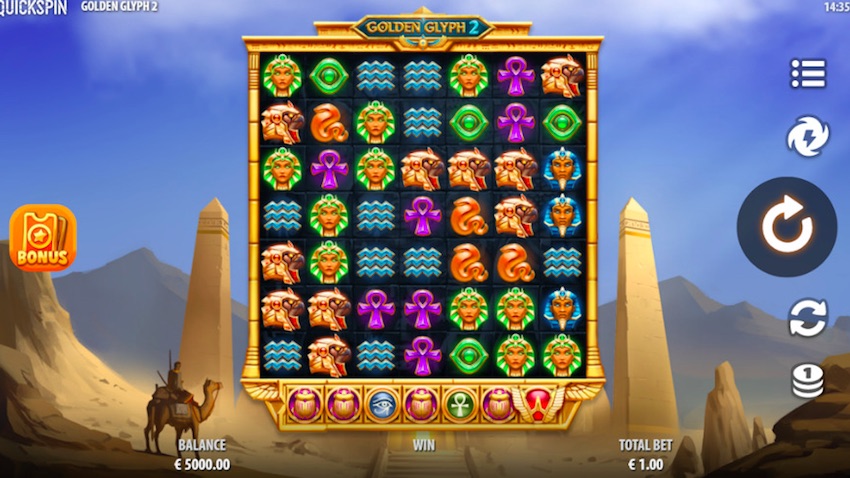 Golden Glyph 2 stats are as follows: the game’s RTP Is set at 96.09%, nothing to write home about, but fine nonetheless (note, the original game’s RTP was slightly higher at 96.19%). Meanwhile the variance is most definitely higher at 4/5, and with a top payout of 26,800x, this slot is unashamedly appealing to the high-risk players out there. So, if you like chasing down those big wins with cumulative modifiers and don’t mind a frustrating session or two in the mix, then this is a game for you. But if you prefer casual slots play and regular payouts, we suggest you try elsewhere.

The artwork here is really good and just what we’ve come to expect from Quickspin. The low paying icons are shown as 4 hieroglyphs including water symbols, eyes and serpents, whilst the premiums are represented by the male and female pharaohs and the bird god Horus which you will probably recognize from plenty of other Egyptian slots.  The highest value clusters are those of 15 or more identical symbols and they deliver wins of 150x.

Look out as well for the ‘W’ Wild icon that subs in for all others to form winning clusters. 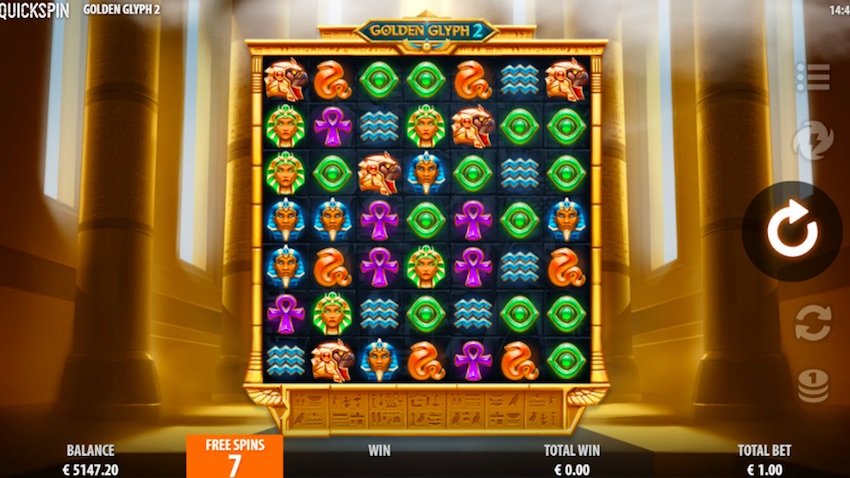 High volatility too risky for some

The features bare similarities to the original game and things getting particularly interesting with the Power-Ups where cumulative features can drive up the wins. Here is how it all works:

Like most good cluster pays slots, Golden Glyph 2 follows a Cascading Wins format. After a winning cluster is formed, all the winning icons are removed from the grid and new ones drop in to replace them. If more wins appear, so the process repeats. This is a standard feature, but here there is the added bonus of the Power Glyph symbol which appears in the empty spaces left when the winning icons are removed. Which brings us onto the main feature.

If you hit a winning combination that includes the Power Glyph symbols, then you will trigger a Power Glyph Power-Up mode! Power-Ups are awarded according to the ancient hieroglyphs that appear in the row shown under the grid, which change with every spin. If you land more than one Power-Up, then each one will play out in turn.

Here is how each of them works:

To trigger the Golden Free Spins Bonus feature, players are required to Land 3 pyramid scatters on one spin. Upon activation, 7 free spins are awarded. With the first spin, a Golden Glyph wild is added to the grid it remains in play during the feature. However, before each subsequent spin it moves to a new spot on the grid. This Golden Glyph also features a progressive multiplier wild, starting at 1x. When it forms a part of a winning cluster its multiplier increases by 1x, up to a maximum of 50x.

If 3 pyramids scatter symbols land on the one spin during the bonus round, then an additional 5 free spins are added to your total.

Golden Glyph 2 by Quickspin also comes with a special Buy feature, which is available only in certain regions (but not the UK). This feature allows players to purchase their way into the free spins round in one of the following ways:

Golden Glyph 2 is a stunning follow-up to the original Quickspin slot and like all good sequels it takes the best parts of the original and augments them with modifiers and additional features that add bite and thrills to the gameplay. The base game might feel a little monotonous at times but there is definitely potential for things to get really exciting in the bonus round with those progressive multiplier wilds and additional Glyhps. We highly recommend this slot to anyone who enjoys high variance gaming. This will surely one of the big hits of the summer for 2021.