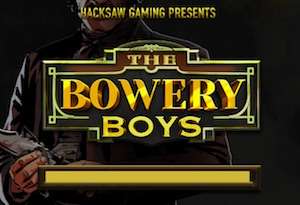 Hacksaw Gaming head to the dark side of New York – the Bowery Slums – in the 19th Century for this crime-themed Scatter Pays slot with 25,000x potential. Land key symbols to unlock Strong Boxes containing prizes, or land bombs to release multipliers of up to 100x. The Free Spins round allows you to store strong boxes, detonate multipliers of up to 100x and unlock the Bowery Bank Vault to release your winnings. Clever and wildly entertaining stuff!

Play The Bowery Boys At These Slot Sites

It seems we are in an era of dark slots filled with strange and often malevolent characters. If it’s not No Limit City depicting retribution and hangings in Western town, Tombstone, then it’s Relax Gaming and their eerie Pirate-themed Dead Man’s Trail. So, it’s fitting that Hacksaw Gaming, known for jolly japes like Tasty Treats and, lest we forget, King Carrot, are turning away from the light and serving up something from the backstreets of New York in an era when gangs terrorised the Bowery neighbourhood and fought running battles.

No, don’t expect fluffy sweets and bright blue skies. Here, under a full moon and skittish clouds we find the 6×5 reel set against the backdrop of a back alley populated by silhouettes and slumped drunks, or in the bonus rounds a dark cellar corridor with boxes of explosives lying around. Make no mistake, Bowery Boys creates a super-cool atmosphere, an intriguing combination of danger, romance and crime.

And aside from artwork and soundtrack, what makes this game is its features which are clever and original as we shall see in this review. You’ll need to land combinations of events to trigger the big prizes – like keys falling simultaneously with Strong Boxes to open them, or dollar signs that unlock the bank vault to bring up accumulated wins.

It’s exciting stuff, so let’s dive in to find out more. 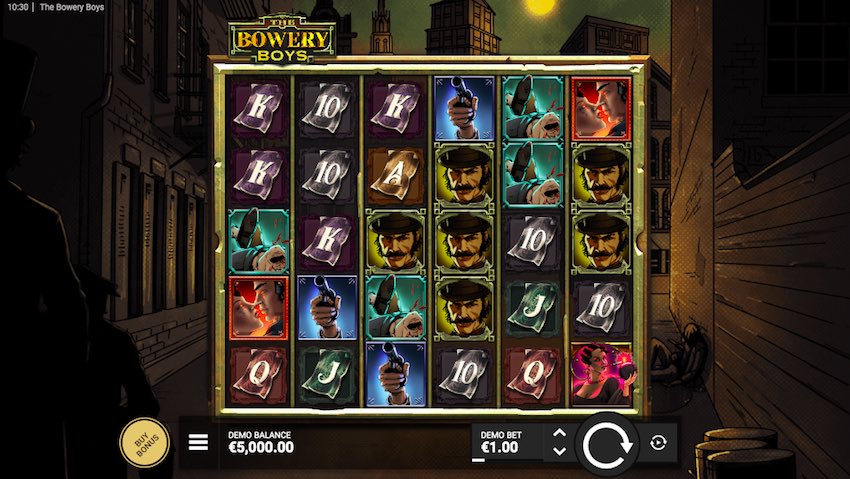 Bowery Boys is a high variance slot and that means a tough play – as you would expect from a game populated by gangsters, they are not going to unleash their bounty easily. The RTP is 96.41% which is a touch above average and the minimum of 10p means a good entry point for those with a lower balance to start with.

The maximum payout from the Bowery Boys is 10,000x stake, which can be triggered with the right combination of Strongboxes and Blasting Bomb Multipliers.

One of the interesting features of The Bowery Boys is that it is a Scatter Pays slot which means wins are triggered by landing 8 or more identical symbols ANYWHERE on the reels. That means NO PAYLINES.

Simple low value icons are represented by the cards 10 through to Ace which deliver payouts of between 0.1x to 20x for up to 15 matched symbols on the reels. The premium symbols are a dubious man with a moustache, a lady holding a bomb, a fight scene, a gun, canoodling couple, strongbox, gold key, bonus symbols and high cards. These nicely-drawn picture symbols can award from 1x to 100x your bet for 8–15 of a kind.

There is also a powder keg symbol to act as Wild, substituting for all the other symbols in the game to create more potential wins. 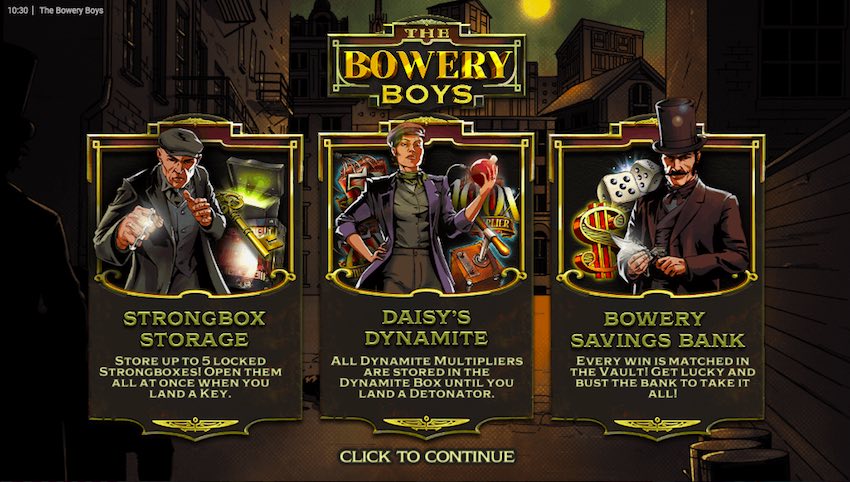 Hacksaw are no shirkers when it comes to producing interesting features in their games and The Bowery Boys does not disappoint in this regard. There are more than a few clever and inventive ways to unlock the big wins.

So, here are the key events to look out for.

These basic features are enhanced in the FREE SPINS ROUND which comes in three formats, set up when 1, 2 or 3 bonus symbols drop onto the reels.

In summary, The Bowery Boys is an atmospheric and edgy slot with a creative theme and interesting Bonus features. From the moment we loaded up the game there was a strong and pervading air of menace from the shadowy figures populating the background and the crime theme. But there is also a touch of romance in the characters on the reels which adds intrigue and glamour.

As far as gameplay goes, the game certainly doesn’t disappoint. The All-Scatter Wins mechanic is quite unusual and leads to unexpected payouts whilst the use of a combination of keys and strongboxes to unlock multipliers is clever too. Our favourite moments of all however came in the free spins round, Bowery Savings Bank, which gives you huge potential when lots of wins are accumulated and a few lucky dice throws are added into the mix. But of course, this dark slot has an added layer of jeopardy – just when you think you are about to unlock big wins, the police can come in and rinse you for 50%!!! If you like tension, you’ll love it!

For those with a keen eye on the maths, the huge volatility might be too much, but at 10p a spin we say it’s worth having a few plays just to witness the imaginative features and get a proper dose of 19th century Hell’s Kitchen!!