The Last Sundown is a medium-high variance slot from Play n Go with a dystopian theme. The slot is played with 5 reels, varying rows and 243 paylines, increasing to 7,776 with the Split Symbols Feature. There are also Wilds and a Free Spins round where collecting symbols fills a meter to create more splits to help reach a top payout of 36,000x stake. Will you join the battle to save the world?

Play The Last Sundown At These Slot Sites

The Last Sundown is a moody slot that invites players to join the heroes, brothers Rae and Devin, in their fight against the baddies, Lauro and Tuco. The setting is a barren street, washed in an orange haze with a sunset dominating the horizon. The atmosphere of this slot is that of a futuristic dystopian movie.

Think Mad Max and you’ll be bang on the money for this one! And its already out at the best UK slot sites.

Before we get into the details it’s interesting to see how much this is a game of its time. Anyone who regularly enjoys playing slots will know that we are in the midst of a golden age of slot development right now and much of it is being pushed by exciting new developers like No Limit City and Relax Gaming. Their influence on the scene is growing and you can see how even old-timers like Play n Go, who have being doing this stuff since the late 1990s, are taking inspiration from NLC in games like this one with its dark theme and use of a splitting cells feature. Graphically as well The Last Sundown isn’t a million miles away from games like San Quentin xWays with its gnarly characters and harrowing setting.

Having said that, The Last Sundown is a more traditional game in other respects – it comes with 5 reels and 3 rows initially, although the initial 243 ways to win can increase to 7,776 thanks to the Splitting Symbols feature.  Wins are created in the normal way by matching identical symbols on a payline from left to right. 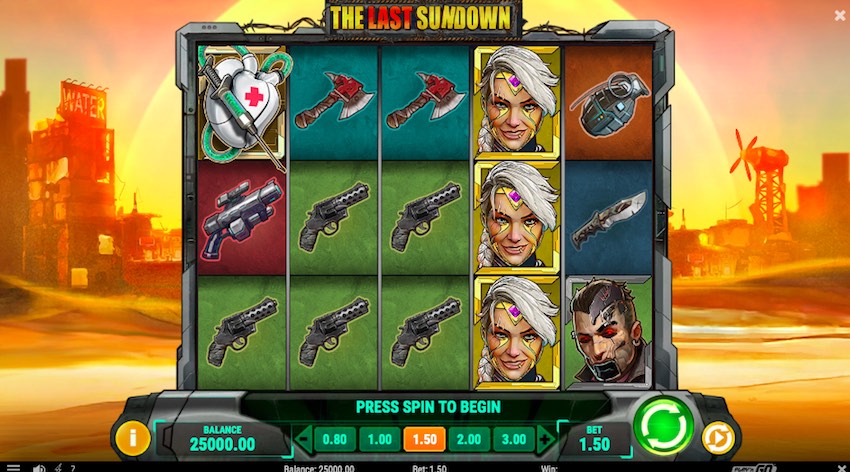 The RTP of The Last Sundown is 96.2%, which is around average for an online slot and certainly for a Play n Go game. The medium to high volatility level makes this quite risky to play, whilst the 10p minimum bet keeps it playable. You can expect a reasonable number of payouts to bets, though your gaming session is likely to include some lean spells.

The maximum payout of 36,000x is a great reward from this barren town, achievable if you manage to uncover lots of Split Symbols and Wilds during Free Spins. Note that the odds of hitting that top payout are 1:1 billion (yes, you did read that right). So, whilst it’s a nice jackpot to think about, realistically anything over 1,000x is going to be a good one off prize in this game.

The symbols in The Last Sundown include the hero characters Rae and Devin, the baddies Lauro and Tuco, along with a robot dog. There are also some weapons, including guns, hand grenades, knives and axes, which award the lower payouts in the game. To achieve a win, you need to land 3 matching symbols running adjacently left to right on the reels. 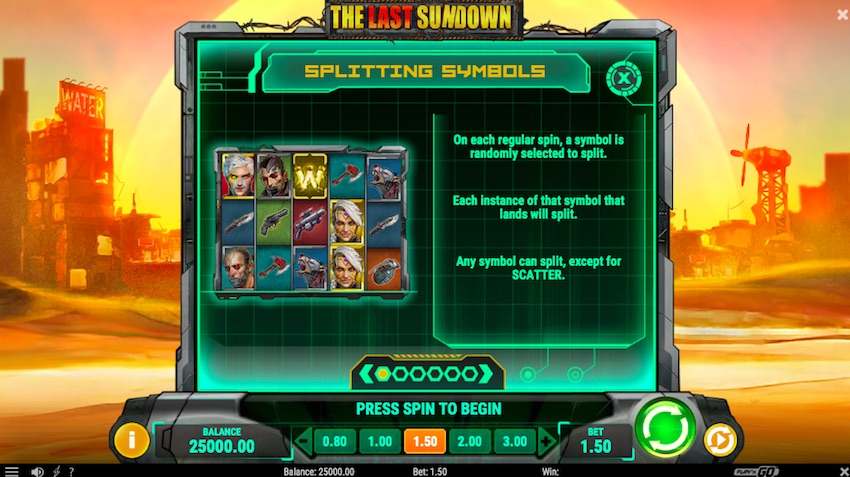 The Last Sundown may take elements of games like Infectious 5 xWays from No Limit City, but in terms of features it is far more paired down than that. We are looking at just two add ons to the base game play here – Splitting Cells and a Free Spins round, though the latter does come with additional splits.

The Split Symbols feature can be randomly activated on any spin during the main game. When this happens, one symbol is selected to split into two and this happens across all instances of the symbol on the reels. If this affects a lot of symbols at once, this can potentially increase the paylines up to a max of 7,776.

Landing 3 or more medical kit Scatter Symbols will launch the Free Spins round. This triggers 8 Free Spins along with a payout of 5x, 10x or 50x stake, depending on how many Scatters triggered the round. Before the Free Spins play out, one symbol is chosen to be the Split Symbol and one is the Collection Symbol.

When the Collection Symbol appears on the reels, it fills the Collector by 1. The more symbols collected, the more Split Symbols are triggered. You need to collect 6 symbols for the weapons, 5 for the characters and 4 for the Wilds. Every time this happens, you also receive 3 additional Free Spins.

The Last Sundown has a dark atmosphere and dystopian theme, offset by the cinematic feel, reminding us of futuristic films like Blade Runner. Despite this interesting edge it’s not generous with the special features, offering only Wilds, Free Spins and Split Symbols. Some might say that it would be better with a more involved bonus game that could make the most of the interesting theme, like rivals No Limit City do with so many of their slots.

As it stands, you’ll be looking for the Wild Symbols and plenty of Split Symbols to try to reach the 36,000x stake jackpot and without stronger features, such as big Multipliers, it seems a tall order to stretch the payouts to this level. But there is plenty of fun to be had in the bonus round if you can build a good sequence of play where you keep filling the meter, adding more splitting symbols and adding extra spins to your total. This is where the big wins may happen. And in terms of maths, the 96.2% RTP and medium to high volatility give a good gaming session, with plenty of risk along with a decent number of payouts in relation to bets.

In summary, if you enjoy sci-fi themes, you should appreciate the styling of this game, though the lack of involving features might not lead you to want to spend long in this dystopian world.