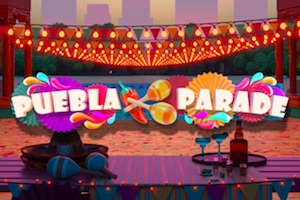 Puebla Parade is bright and cheerful medium-high variance, Mexican-themed slot based on the annual Cinco de Mayo festival. The action takes place on a 5-reel grid with expanding rows up to 7 high, bringing up to 421 paylines. The gameplay is simple, built around Senor and Senorita Wilds that trigger re-spins and come together to form Pareja Wilds that expand the reels and trigger free spins with 3x multiplier wilds. The top payout is 5,000x and RTP is set to 96.2%.

The prolific game provider, Play n Go, is famous for its wide range of video slots of all shapes and sizes, formats and maths models. Their catalogue of 100s includes classics like Book of Dead, House of Doom, Reactoonz and Raging Rex. For their latest release– scheduled for April 2021 at most slot sites – they have turned to the annual Mexican festival of Cinco de May. Every year on May 5th the Mexican nation celebrates its famous victory in 1862 over the French troops of Napoleon III at the Battle of Puebla. This battle inspires particular pride in Mexicans as their army overcame astounding odds – their troops numbered around 2,000 whilst the French has something like 6,000. Overcoming amazing odds then? Surely there is a metaphor for a slot game in there …

Being about the celebration rather than the battle, Pubela Parade is a joyous slot with vibrant colors and a party backdrop – a Mexican street party with bright sombreros and bunting whilst the reels are packed with brightly colored Mexican day of the dead masks and musical instruments.

In essence, Play n Go have created a simple slot – there is none of the head-scratching feature complexity of their grid games. The reels are 5×4, possibly increasing to 7 rows in the bonus round, and the rest is all about wilds, re-spins and free spins.

For Puebla Parade, the RTP is set to default at 96.2%. However, it may vary depending on the site you play at and country you are in. The lowest RTP setting is a very poor 84.2% to it is best to check on the game info screen before placing your bet.

The variance is rated 7/10 on Play n Go’s own game sheet which is medium-high. Not as tough as Book of Dead for example but still a maths model to be wary of. The top win is not as high as other recent releases from this studio either – just 5,000x. However, the stakes start at just 5p, allowing those with small budgets to have a crack at unlocking those payouts.

If you’ve ever played other Mexican-themed games like Thunderkick’s Esqueleto Explosivo you will know that these slots are usually awash with colors. So too is Puebla Parade which features a variety of symbols that are styled and associated with the Cinco de Mayo party.

The card symbols are lower-paying and are presented as an A, K, Q, J, 10, and 9. If a player successfully lands five of the same lower-paying symbols they will pay x0.6 worth of the original bet.  The high paying symbol types are specific to the Cinco de Mayo theme. These symbols include a guitar, salsa and chips, tacos, skulls, and piñatas. Successfully landing five of the same symbols in this category will result in a payout between x0.8 and x4 the original bet.

Key to the action though are the Wilds, of which there are three types – the Senor, Senorita and the Pareja. These are multi-faceted – they swap in to replace all others to form wins, but they also trigger the bonus round when they drop in the right combination. There are no scatters in this game.

Ok, so you’ve figured by now that this one is all about the Wilds which can land anywhere at any time. But what functions do they actually trigger and how can they help you push towards those big wins? Here is how:

Who doesn’t love a good festival slot? This game has aspects of Esqueleto Explosivo it in, Hot Fiesta, and even Big Time Gaming’s excellent Extra Chilli. The vibrancy of the background and reels and the soundtrack put you in a good mood from the moment you load up the game. Puebla Parade also offers very simple gameplay – you’ll just be waiting for those Senors and Senoritas to drop and dance together to from the better value Parjeas which can trigger much bigger wins with their 3x multipliers. The holy grail is to have three of these romantic couples waltzing their way across the reels with all 7 rows activated for as many free spins as you can get so you can watch the wins building up as they go.

On the other hand, we should also point out some aspects of this slot that might put some players off: the low value symbols are just that – you don’t get much for the card icons. Also, the top payout of 5,000x is nowhere near what we are seeing from rival suppliers like No Limit City or Relax right now.

In summary, this might not be one of Play n Go’s best slots of 2022 but its party vibe, low stake entry point and easy gameplay are attractive enough to make it worth a few spins in the sunshine this summer.